Can we preemptively direct flaggers (at least newer ones) to the location of flag responses?

As a moderator I respond to a lot of flags, and when I decline them I try to give good explanations. Most recently, I responded to a flag requesting that a question be deleted by directing the flagger to info on disassociation (no we won't delete that question your coworkers found, but here's something you can do instead). I put care into responding to flags.

I suspect, though, that a lot of people, particularly newer users, never think to click on that "flags" number in their profiles, and so they never see the responses. We shouldn't send notifications for flag responses; that would be way too noisy for a lot of people. But can we add something to the flag dialogue saying something like "check the 'flags' link on your profile, under views, for our response"? This could either be added for everybody (easier) or added until some threshold (number of flags? rep?) is met (harder). 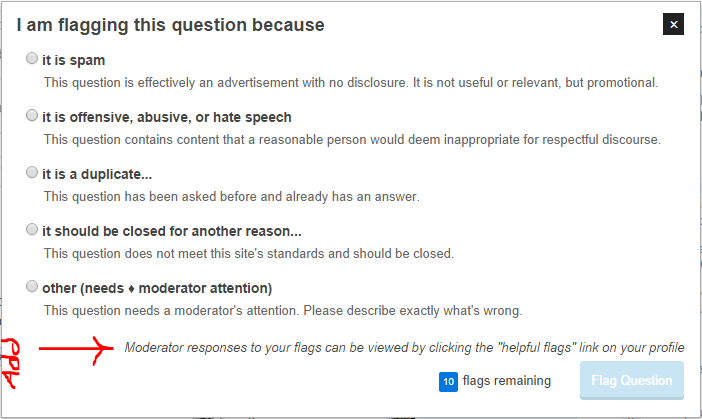 If it contained a link that'd be even better, but any sort of hint that there will be an answer that he should look for would be an improvement on the "send flags into the void" model that some users have.

151
Allow recovery from flag hellban
60
If I have flagged a post, show me a “flags” link in my profile
61
Send custom flag responses to messages inbox
3
Link to the flag history page on the flagging privilege page

825
Can we have the ability to retract a close vote before it closes?
93
Allow moderators to reverse and/or nullify flag decisions
45
Can we have a feature to delay a flag for a short period of time?
21
When flagging, could we see any previous flags we've raised on the same post?