One of my recent questions on Programming Puzzles and Code Golf, titled ☁ A Little Cloud ☁, was renamed in an edit to Little Chandler is sad. Draw him a cloud to cheer him up. I don't mind the title change, but I am curious as to the reasons why it was changed. Was it because of the Unicode characters? Or something else? I was hopeful to create a series of challenges based off Dubliners, but if there is something wrong about using the titles of the short stories as challenge titles, I would like to know.

In particular, is there a full set of rules or guidelines available for what sort of titles are allowed?

This was originally asked on PPCG meta, but I was redirected here, as it was a SE dev that made the change, allegedly because the Unicode was showing up on Hot Network Questions.

Unicode is allowed, as far as I can tell and in my opinion. However when a question becomes popular enough to appear in the Hot Network Questions list, its title should be descriptive enough to make sense in any site, not just the site where it was asked.

So while "☁ A Little Cloud ☁" makes sense to the Golfers, others would just be clueless when it appears in other sites. Descriptive title would be better in such case, telling what the question is about.

It is certainly allowed to use Unicode, when appropriate. We don't discriminate :-)

On the other hand your question had a title which, in my opinion, used Unicode as decorations and needed improvement.

Do use descriptive titles and avoid flashy decorations. If you want more views for your question, write about an interesting topic -- do not use your title as a small "punch the monkey" ad. I appreciate the cleverness, I truly do. 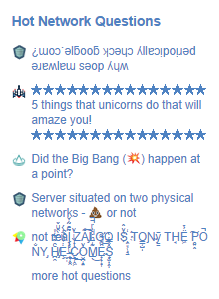 Titles are meaningful things for the site they are on. Sometimes, they get picked up for hot questions. While mathjax appears to be excluded from enabled sites (mathjax titles from Math.SE look like gibberish outside of there), there is nothing fundamentally wrong with question titles like "Why is 有 (yǒu) the only verb that requires 没 while other verbs can use 不?" from chinese.SE, nor "What's the difference between שמחה and חדוה?" from Mi Yodeya, a hypothetical "how does one type 💩 on a macintosh keyboard?" or whatever gaming happens to ask today (no, they don't use unicode, but they do have interesting titles).

Those are perfectly legitimate question titles that show up and make use of unicode.

The issue is, is it a good title? That has nothing to do with unicode in the title.

Not the answer you're looking for? Browse other questions tagged discussion questions title hot-questions .