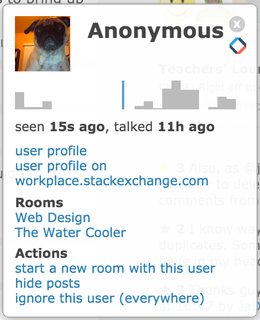 This shows when a user is generally active in chat.

Chat is fickle* and will often make you look like you were active. And then someone pings you because it looks like you're active, when you're really snoring on your bed. If you are a mod (or a CM) who has responsibilities, often a single ping is followed by several others in quick succession.

* Many heavy chat users, employees and mods primarily I'd guess, never bother to leave rooms or log out because their computers stay on. Despite not using the computer, for some reason they will pop up as active and their user icon will become un-gray and move to the front of the active users list in the room making it look like they are active when they aren't. I don't know if this is due to the computer waking up, something involving notifications on the mobile app, or something else entirely, but it happens regularly and makes it seem like folks are active when they aren't.

For the person pinging, this can be frustrating as the person you pinged can't actually do anything about it until they wake up. For the person being pinged it's frustrating because you wake up to a bunch of tasks that may have already been completed by someone else, and have to spend time checking to make sure they are done just in case.

To avoid these issues, when you type @jmac or whatnot in chat, it will let you know if the user is usually active during this time. So for instance, in the graph above, we can see that the user is probably sleeping, so the system should give me a little warning window that says:

It looks like Anonymous rarely uses chat at this time of day.

This is just for information purposes, and doesn't actually prevent sending the message, nor should it pop up if someone replies to a message. This will prevent a large portion of those 3am pings that I seem to get with regular frequency, and make sure that folks are addressing people who are conscious and can actually do something.

I'm not sure if we really need a warning, just a way to show that they probably aren't awake (since it'll probably be only power users using this anyway). For users that we have enough information on to make this (insanely creepy) prediction on, how about this?

This image has been... slightly altered (yay chrome dev tools), but you get the idea. I would propose only showing the 'usually active' text for the first one in the autocomplete line, I put it in the second one just to show how cases of current-activity could be handled.

Not the answer you're looking for? Browse other questions tagged feature-request chat ping .

1189
Encouraging people to explain downvotes
842
Allow an edit to notify downvoters: “I think I've fixed the issue now - please check”
962
Show all of my question/answers to me even if they are deleted
417
Decision on rejected edits should be displayed as a notification to the editor
1229
Don't throw away all votes when a user is deleted
129
Can I please be trusted to not to script a bot that dumps an endless stream of spam messages into the chat?
50
Disable three-letter pings from chat to save Oliver, Olivier and Olive from Oli's pings
324
Toward a philosophy of Chat
381
If you're gonna talk Politics, you must respect those who disagree