Am I the only person to find the woot ad noxious? [closed]

Ask Question
Asked 12 years, 8 months ago
Modified 3 years, 4 months ago
Viewed 867 times
14
This question was closed because it could no longer be reproduced. It is not currently accepting answers.

Specifically the one that tries to masquerade as SO content. I find this the electronic equivalent of the "special advertising sections" in print magazines that join the stiff cardboard ads in the trashcan on sight.

For anyone who hasn't see it yet it's this ad in the sidebar: 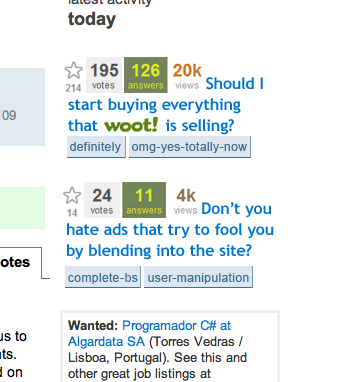 It's satirical. The whole point is to poke fun at that sort of ad. It's very meta, which is our raison d'être.

Now, when I look at these two specific sites and compare the non-ad site vs the ad-supported site, I'll take the ad-supported site every time. Of course, these aren't the only two business models out there, but the dichotomy really changed my mind about the place of ads on the web and what the alternatives might look like if ads ever cease to be a viable option.

As I already said, I like it. I think it's funny. That's the problem with humor though: I'm the only one who has it It's very subjective.

I actually thought these were pretty clever as far as sidebar ads go. Particularly the tags on the bottom "fake" question. When the sidebar ads are obviously tailored for SO specifically, they immediately grab my attention way more than "generic" ads.

I would much rather the advertisements actually attempt to work within the context of the system than just some random AdSense. Creativity goes a long way in attracting users.

If you are that turned off by it, there are plenty of ways to do ad blocking with your choice of web browser.

Well, look guys/gals it's really a witty advertisement. I can tell they put some thought into it to make it look like the site , and there's a little self-deprecation comedy there too!

Ha ha ha good on them to be able to poke a little fun at themselves! It's really a testament to their dedication and desire to "fit in" with the "community" that they spent all that time and effort. Boy, I sure wish other advertisers could be this clever and considerate!

This ad placement/strategy is not unique to SO. You will see that on many websites.

Personaly, they are just another ad to me and a part of advertising.

This isn't the first ad of its kind I've seen on Stack Overflow. There was another a while ago that confused users by imitating the tab-style layout of the Stack Overflow navigation.

Any ad that attempts to trick people by imitating site content, or pretend it's not advertising, is underhanded.

Attempting to weasel out of that with "but WE'RE not doing that, we're IRONICALLY poking fun at people that do that!"

... well, maybe you're doing that as well, but you crafted an ad that imitated site content to do it, so mainly you're engaging in the very activity you're deriding. Slightly clever, but wholly hypocritical, and still underhanded.

It annoys me that a site I enjoy as much as Stack Overflow allows advertisers to use these tactics.

I use AdBlock Plus for Firefox.

When I first saw the ad, I thought that I would upvote it if I could.

It gets old after 3 or 4 viewings, but it's fairly legitimate, and fun, to use that kind of device in order to get noticed. The woot ad that really made me laugh, though, was the yellow flashy one (“Click here to prove me wrong against my boss and make me cry” – felt like at the office :-)

2
What's behind these strange adverts posted on Stack Overflow?
3
Should I buy everything that woot! is selling?
58
Should ads that mimic Stack Overflow UI be allowed?
5
Has anyone clicked the new Woot! ads?
2
Are there too many corporate tag logos on SO?
15
User option to disable sponsored tags in the tag list
7
What kind of ads do you like?

1491
Fastest Gun in the West Problem
1873
What is the XY problem?
225
We're standardizing the sidebar width at 300px on all sites
2788
A Terms of Service update restricting companies that scrape your profile information without your permission
384
If you're gonna talk Politics, you must respect those who disagree
827
Net Neutrality and Stack Overflow / Stack Exchange
96
Affiliate Ads Are Coming To The Network
334
Brace yourselves: The GDPR is coming!
379
Updating the Hot Network Questions List - now with a bit more network and a little less "hotness"!
2502
Firing mods and forced relicensing: is Stack Exchange still interested in cooperating with the community?