Sometimes when poking around MSE (or any meta site, really), I'll come across an interesting feature-request, read through it, think it's a great idea, and notice that, oh hey, it's already been status-declined. It rarely actually happens in that order, but regardless, darn.

Here, this really cool idea got shot down. I'm left with two options--I can either begin wallowing in sadness and cursing the name of whichever CM is listed in the revision history, or I can go and read their response, and nine times out of ten think "oh hey, I didn't think of that unintended consequence of this otherwise well-meaning feature request. You guys rock."

In the interest of promoting the latter case, it would be nice to have some means of more easily finding that official response.

There's an unfortunate tendency of really good ideas--like the ones to which I'm most keen to read the official answer--to have a bazillion (I'm rounding) answers that say "this is great! And we could also do this!" and so on and so forth. That's also generally what the accepted answer is, particularly when the OP wasn't satisfied with the official response (if they saw it at all, amid all those answer notifications). So this leaves me scrolling through a list of answers that poke and prod at all the interesting twists and turns this declined feature request could have opened up. I generally start at the bottom, because I know a negative reaction to a positively-received request will likely receive a down-vote or 197. But even that isn't foolproof, and sometimes I find myself scrolling almost to the top of the list before finally seeing the post I'm looking for, if there even is one. If there isn't, well, I have to check again in case I missed it. Clearly, not all [status-*] posts have explanations, and this isn't about that. But it would be nice to know that the current one doesn't, just so I don't bother looking for one.

Okay, so perhaps I'm being a tad overly dramatic about all this. But my point stands.

Is there anything we can do to make it a bit easier to find the official response to a feature request, or perhaps even meta posts in general?

The best solution I can think is to have a banner somewhere either above or below the question (sort of like a locked, closed, or protected question might) that says something along the lines of "click here to read the official response," but honestly I'm not a huge fan of that, and I'm definitely open to suggestions that aren't so intrusive.

The biggest cons I can think of for any solution to this are as follows:

Beyond that, any implementation should be able to somehow accommodate times when multiple employees respond. As with the third listed con, this could be resolved by only displaying under those circumstances.

The thought has crossed my mind of only linking to the same CM as changed the posted status, but even that is not ideal both because of likely-prohibitive implementation difficulties, and because the same CM doesn't necessarily change the status as answer it (also a good argument against the very valid "why don't you just ctrl+F the editing mod's name," even on top of that their edit wasn't necessarily the most recent).

For what it's worth, this is the feature request I was looking at when I thought of this: Is there Markdown to create tables?. That's not a particularly difficult one, since Shog's answer is third to the bottom on it. But it's not hard to find high-rated feature requests on which this could be even more useful.

Also, just to be clear, I've mentioned status-declined a couple times here, but it's not like I don't also like reading the release notes of status-completed, or even the commentary on status-planned et al. when available. So in an ideal world, this would apply to anything.

And come to think of it, this feature could even be expanded to any moderator. If a moderator responds to a meta post, there's a reasonable chance that their comment is deserving of some special attention.

This is how I vision it: 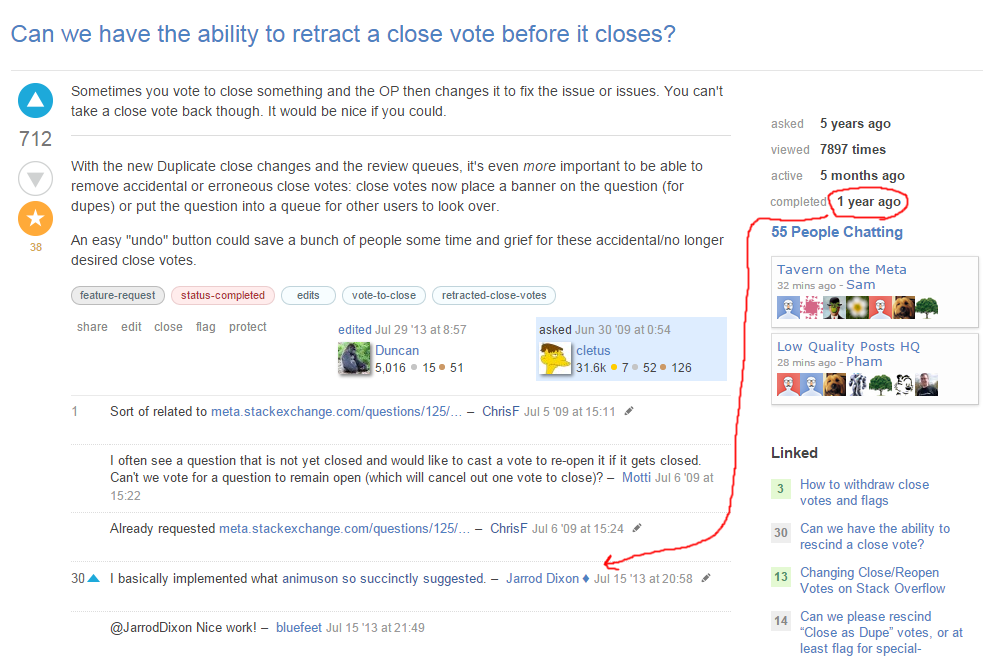 Adding another link in the sidebar, linking to the official response. The "completed" or "rejected" with timestamp will be added automatically, unlinked at first, and moderators will have a way to set the link.

I prefer using the "on hold" method. Have a little sam saffron box below the question similar to a question on hold that says

This feature request was declined because...

With a little explanation in there, perhaps pointing out the answers below that informed or represented the decision.

This is more powerful than an accepted answer, doesn't beget questions about why mods are choosing the accepted answer, and shows that it's a moderator or authority that has added the status declined. It's obvious, and the code already exists to show it, it just needs to be another thing like bounties, protection, on hold, etc.

As a less intrusive way to implement this feature-request: Use a feature similar to the "accepted answer" feature. Let's call it the "official answer".

Any answer to a question on a meta site (including MSE) can be marked as the "official answer" for that question. This causes the answer to be ordered before all the other answers (even before the accepted answer, if that is a different one) and the answer gets an icon to show that it represents the official viewpoint of the SE team.

This makes it easy to find the official standpoint on a feature request, if there is any, because it will be the first answer listed. It is not as intrusive as a banner and more persistent than a comment.

This isn't an idea for the display part, but rather for the employee UI.

I was just thinking, and I missed a key part of this last night. I had been thinking that it should be limited to feature-requests to avoid any confusion on "for fun" posts, but now that I think about it in the light of day, it makes sense to actually do this--as, ironically, my title suggests--for anything with a [status-*] tag. Nothing purely for fun will be tagged status-completed (probably).

Beyond that, then, the system could pop something up whenever it detected either:

And perhaps something for editing existing ones with [status-*] tags, but I'd like to see it promote it at the time of retagging.

That would let the editor or answerer adjust the currently-selected "official answer" (note, this answer doesn't address how to display that once it's chosen). That would allow moderators to tag then answer, answer then tag, or only do one of those while another one does the other, and all cases would be handled.

Beyond that, even for community-ads posts which are generally marked as completed, the adjusting moderator could just disregard the suggestion to pick an official answer. So in that sense, it's a win-win.

This could even be opened up to official endorsement of non-official posts. I'm not sure whether we'd want to push it quite that far, but I know I've seen answers before where a moderator or employee comments saying "that's exactly right," and it seems like it would be nice in those cases to be able to highlight that answer, without having to post one of their own.

The major con I see to a system like this is that there's no support for historical questions, since it has to happen manually. We could fake it with a database hack and just assume that an answer posted by an employee who also added the [status-*] tag is the official one, but that's never nice.

Not the answer you're looking for? Browse other questions tagged discussion feature-request user-interface per-site-meta .

831
Is there Markdown to create tables?
828
Can we have the ability to retract a close vote before it closes?
5
How should I list an improvement to my own feature request / discussion hybrid?
0
Can moderators leave a note when things are by design or declined?

1111
Encouraging people to explain downvotes
800
Allow an edit to notify downvoters: “I think I've fixed the issue now - please check”
1393
Fastest Gun in the West Problem
1759
Could we please be a bit nicer to new users?
1165
Don't throw away all votes when a user is deleted
640
Your answer is in another castle: when is an answer not an answer?
2756
A Terms of Service update restricting companies that scrape your profile information without your permission
2286
Firing mods and forced relicensing: is Stack Exchange still interested in cooperating with the community?
1903
Stack Overflow is doing me ongoing harm; it's time to fix it!