I am in Danger of being banned! But Why? [closed]

I recently got the notification on English Language & Usage that I am facing the danger of being banned from asking more questions: 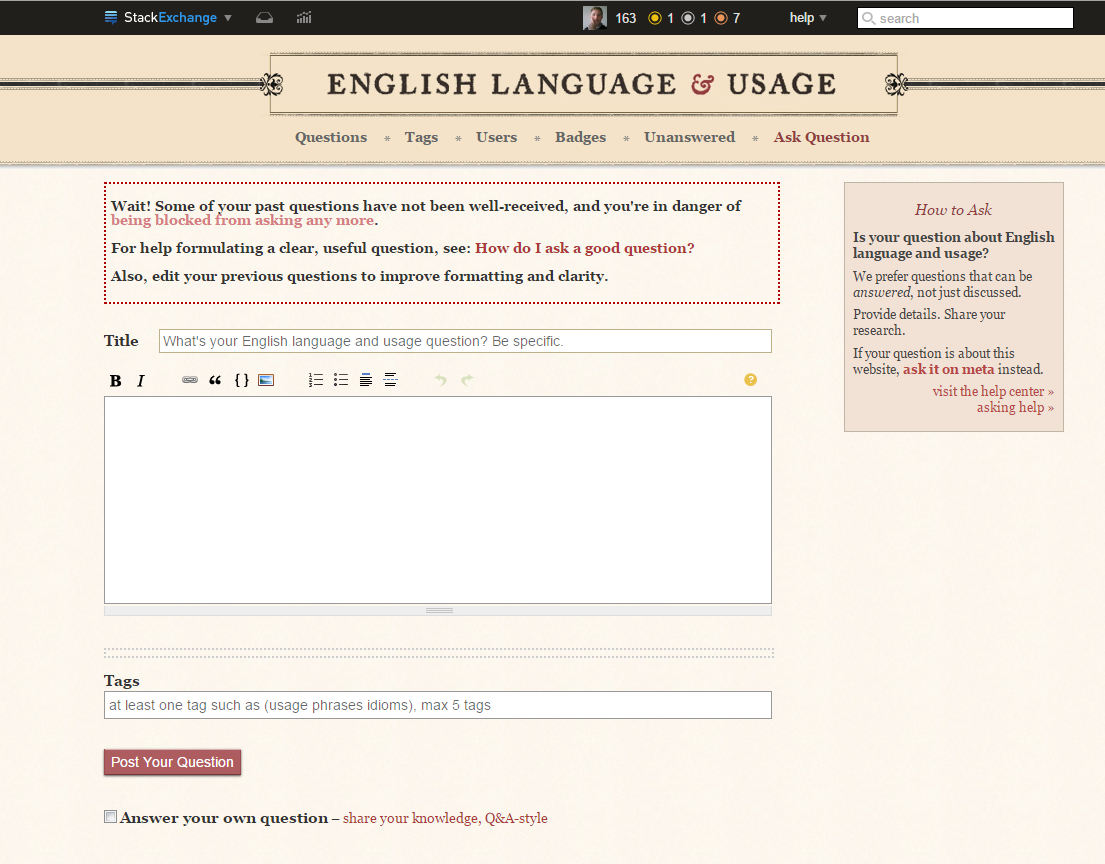 This hit me completely by surprise and so I checked my profile and my past questions.

Is the rating of the previous two (!) questions really so heavily weighted that I am in danger of being banned?

Am I missing something??

btw.: This notification only appears on the English Language & Usage site and on none of my other SE sites where I am active.

As the warning system is network-wide, rather than specific to a particular site, the question is here rather than on ELU meta.

And from what we can see of your questions, one's closed, another's a duplicate, and a third should probably have been closed as a duplicate, as identified in one of the comments on it.

So the warning is true: some of your previous questions have not been well-received.

The system looks to me to be behaving as it should. The system does remove the question-asking privilege for people who ignore the warning, and repeatedly produce low-quality questions. And the system does now give you enough early warning to change your behaviour before further questions result in that privilege being removed. That's what's happening now - it's an early warning, giving you enough time to react. It's up to you what you do about it.

You received the warning automatically because of your 2 most-recent questions. Both questions were closed, and one of them was downvoted to -2. It looks like that is enough to give you a reminder to post good, on-topic questions.

It is just a warning, and you can ignore it if you feel your questions on the whole meet the quality standards.

In other words, see it as someone shouting Oi, if you keep heading in that direction you'll fall of the cliff into the shark-infested waters! Be careful! rather than imminent banning.

Not the answer you're looking for? Browse other questions tagged discussion asking-questions post-ban .

63
Warn new users when they ask a question after a previous question is closed, downvoted, or deleted
29
Quality ban warning

928
Why aren't people voting for questions?
259
Closing changes: [on hold], unclear, too broad, opinion-based, off-topic reasons, bye-bye to Too Localized
10
English Language and Usage vs English Language Learners
182
A proposed philosophy of question migration
496
Congratulations to our 29 oldest beta sites - They're now no longer beta!
2510
Firing mods and forced relicensing: is Stack Exchange still interested in cooperating with the community?
583
We're switching to CommonMark
311
Goodbye, Prettify. Hello highlight.js! Swapping out our Syntax Highlighter
222
Duplicated votes are being cleaned up