Make Posts.Id visible when viewing a post in the application [duplicate]

First off, hooray for the app \o/ It is a substantial upgrade from the mobile browser .

I have started using it quite a bit lately and really like the feed and other features. I find myself using it as a searching device and use it frequently for wandering through posts. Often times, I will find an interesting question that I'd like to view in another device and possibly engage in. I generally am long-winded and don't answer with one or two liners so, I am going to prefer a different device other than my phone. There are a few built in ways to navigate to this post from the app to a different device (that I'm aware of):

There's no way to view a post's Id when viewing a post. What I'd really prefer is some way of seeing the post's Id so I can quickly navigate to it on other devices. I don't really care how noticeable it is, as I know not all users will care to have this, but I still think it'd be nice to have a way of quickly identifying a post so that I can switch to another device, navigate to the site that I was viewing and search the post Id to go directly to the question.

As a suggestion, maybe adding it to the question options header so that it reads: 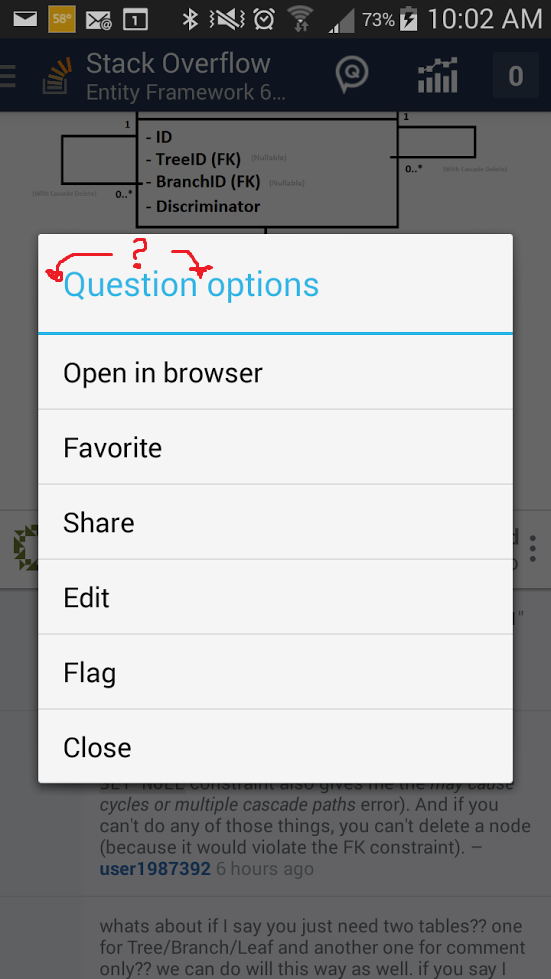 Make a question option View details or something similarly worded that show a pop-up of details about the post, which obviously will include my coveted post id as well as maybe some metadata about the question, ie created datetime, amount of edits, view count, last active date, related content, ect. Most of this suggested metadata come from the content in the sidebar of a post.

I fully agree that we need better ways of handling cross-viewing-experience syncing of questions. We've been throwing around the idea of creating a list of "Last 10 viewed posts" or something that is synced across all web browsers / apps / etc so you can be reading something on the Android app then instantly continue reading it from your computer and so on.

However, I don't think there's anywhere we can easily put in the post id here without making it seem out of place and confusing most users. I currently click "Open in browser" on the pop-up you posted and copy the URL out of Chrome to whatever I want to view the post on, which seems like an OK compromise for now. I'll change my stance on this if more people are facing the same issue and think leaving the app to fix it is a bad solution.

Marking as favourite when on the app is a usable option, and then when on the 2nd device just remove that favourite.
Although this is a bit messy, as you've said.

However, your request to see the ID means you have to remember it and type it in another device, which is almost as fiddly as adding and removing favourites.
It doesn't sound like a lot of dev work, as I suppose the ID is already available somewhere in the back end.

That said, I don't really see any other use for the ID being visible.
So if you can think of another way which would be useful for many users, and/or perhaps something which introduces an additional use, then you'd be onto a winner.

Some thought is needed, but it's just an example - eg perhaps only last X (60?) questions viewed, and perhaps only stores questions when viewed on the app.

While it would have questions and & answers you do not want to view on another device, you can at least see your most recently viewed questions and know from the title which one you want to answer.

This also means you don't have to immediately jump on to the 2nd device, as you can keep browsing on the app, and later on view the historical list on 2nd device and identify which questions you wanted to answer from the titles.

Just an example, I'm sure there are other options/possibilities. And this example idea would need more thought into how useful it would be for other users for different purposes.

Not the answer you're looking for? Browse other questions tagged feature-request android-app navigation .

900
Show all of my question/answers to me even if they are deleted
408
Reward finding duplicate questions - +10, +2, -5
409
Decision on rejected edits should be displayed as a notification to the editor
491
Implement ```-style (fenced) Markdown code blocks
203
Stop using real accounts in suggested edit audits
45
Allow us to access a post's Reviews directly from the post itself?
377
Add an “I don't understand” option for review audits
256
Let’s improve our site navigation