Stack Exchange API too many requests from this IP address

I am using the Stack Exchange API to get Stack Overflow data, but I am getting "too many request from this ip" after making only five requests. I got JSON content like this:

I made the following requests to Stack Exchange without an access token:

It looks like you selectively read the throttle guidance

A dynamic throttle is also in place on a per-method level. If an application receives a response with the backoff field set, it must wait that many seconds before hitting the same method again. For the purposes of throttling, all /me routes are considered to be identical to their /users/{ids} equivalent. Note that backoff is set based on a combination of factors, and may not be consistently returned for the same arguments to the same method. Additionally, all methods (even seemingly trivial ones) may return backoff.

If I take your first URL on my first response I immediately get a backoff for 10 seconds:

So don't go down the route to guesstimate how many calls per minute you're allowed. Instead always honor the backoff.

Note that the backoff can be "undefined" (as in not present in the response) meaning you don't have to honor a backoff before your next call. But don't be abusive, keep it way under 30 requests per sec.

Make sure you have included the backoff field in your field selection: 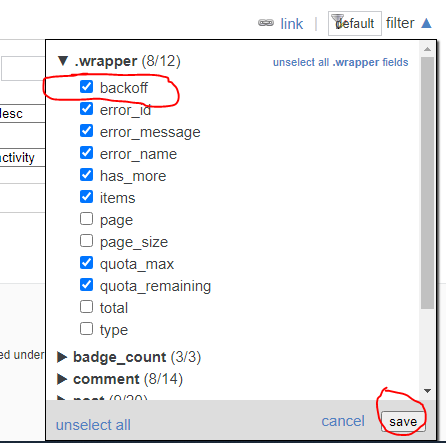 Not the answer you're looking for? Browse other questions tagged support stack-exchange api .

1
Too many requests from this IP address
0
Stack Exchange API Optimal, Acceptable Request Frequency
21
The API is being very standoffish
2
Unable to fetch data from the Stack Overflow API (too many requests)
0
Confusion and frustration with the "Post cool down timer"

1146
Are there any clones/alternatives for running a Stack Exchange style Q&A site?
755
Which tools and technologies are used to build the Stack Exchange Network?
3
Advanced search API not returning results
2
Unable to fetch data from the Stack Overflow API (too many requests)
2
Get answers in JSON for a given Stack Exchange article
2
How to use a search regex for tags in the Stack Exchange API
725
Stack Exchange Public Q&A access will not be restricted in Russia