If I'm a moderator, my only in-band recourse with a rude or non-constructive comment that's directed at me is to flag the post that the comment is attached to, which leaves a record in the post instead, which is not good if the author of the post is not the commenter. I can contact other moderators out-of-band (in chat), but this is inefficient and hard to keep track of.

Please let moderators leave a comment flag which can then be handled by another moderator.

This has been fixed, thanks for posting!

Moderators can now flag comments with the "Something else" reason so that they can draw comments to the attention of other moderators on their team. When a comment is flagged by a moderator using the custom comment flag, it won't automatically be handled: 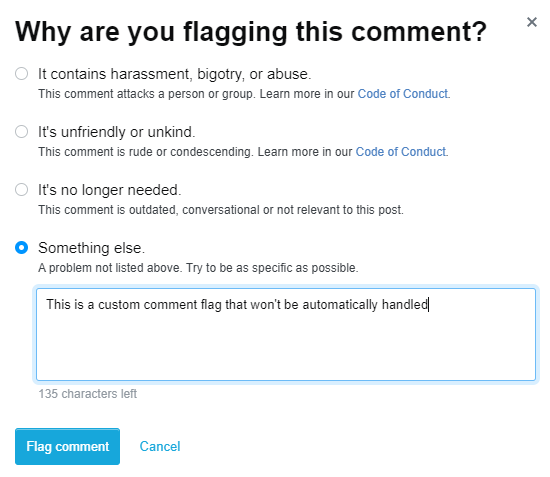 This may be because the moderator can't handle the comment themselves or because they're not sure what to do about it.

When a comment is flagged by a moderator using any of the other options, it will continue to be handled automatically.

I think that there is a case for this to be implemented.

I have experienced and seen cases where users make comments to moderators that are borderline, and at times I think over the border, with respect to the Code of Conduct.

In such a case, the moderator involved, who may be the only moderator who sees the comment, has no recourse other than deleting the comment, or making one of their own, and I often do neither because I think it would be seen as the moderator acting as a censor on content that disagrees with them.

I think a flag that simply alerts the other moderators to content that any member of the community thinks is inappropriate, would bring fresh eyes to it and promote better discourse in comments.

... if a moderator flags a comment with a custom reason rather than one of the canned ones, it should be assumed that he wanted that reason to be visible to other mods so the comment shouldn't be auto-deleted. For obsolete, not constructive, etc, deletion is usually the right thing to do and we shouldn't change that.

Not the answer you're looking for? Browse other questions tagged feature-request status-completed comments flags moderators .

798
Recent feature changes to Stack Exchange
12
Let mods flag comments (without deleting them)
9
Could we allow for (custom) flagging of our own comments?
1
Let moderators know that custom comment flag will not delete the comment

220
Allow flagging a comment after upvoting it
95
Allow moderators to reverse and/or nullify flag decisions
125
Allow diamond moderators to comment on deleted or locked items
139
Allow moderators to hide a revision
154
A guide to moderating comments
299
Add optional box for spam flags letting you say why you think it's spam
93
Community deletion of comments should raise a moderator flag
420
Can a machine be taught to flag spam automatically?
2501
Firing mods and forced relicensing: is Stack Exchange still interested in cooperating with the community?
719
Dear Stack Exchange: a statement and a letter from your moderators