When I flag a comment, I get two different limits:

The first one was triggered by me trying to flag two comments on the same post that were obsolete - it popped up when I clicked the flag button (i.e. it is preventing me from opening the dialogue twice in 3 seconds): 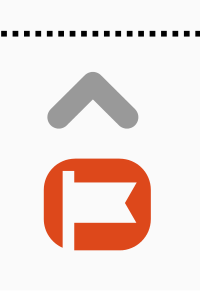 The second was encountered for the same reasons, but when I clicked "Flag comment" (i.e. it isn't letting me actually flag more than once every 5 seconds): 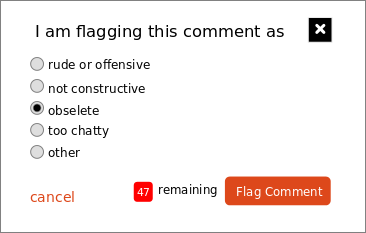 Why are there two different rate limits for the same thing (flagging two comments)?

Even if they are to be kept (I think the 3 second one should go) I think they should be reworded to this:

You may only try to flag comments once every 3 seconds

You may only flag a comment once every 5 seconds

11
Wrong rate limit message when attempting to flag a comment

1104
Are there any clones/alternatives for running a Stack Exchange style Q&A site?
77
Please return the comment rate limit to a flat 30 seconds
580
Exit strategies for “chameleon questions”
218
Allow flagging a comment after upvoting it
152
A guide to moderating comments
522
Global auth is dead! Long live universal login
102
Drop “not constructive”, combine “noisy”, reword “rude” and “other” comment flags
265
Let's hold language in comments to the same standard as posts
2445
Firing mods and forced relicensing: is Stack Exchange still interested in cooperating with the community?