Can we get an indication comments are hidden between the comments?

When there are several comments some of them get hidden, which I don't mind, except when comments in the middle are hidden and I don't realize it till I get to the end. Then I have to unhide the comments and try to figure out which ones I haven't read.

The comments stay in order as they should so you can follow them but when you hide random ones in the middle you can loose the context of the comments until you unhide them all.

I have a couple of ideas that could help with this.

Put some indicator that there or hidden comments between these two

Finally you could highlight the newly shown comments when you hit the unhide comments link like you do when you post your question.

Just wondering if this could get a second look? Seems the community really likes the idea, and Jeff is ultimately who made the decision not to do it.

If the 'show extra comments' link was at the top of the comments, it would be easier to see that some comments were hidden, and it wouldn't be necessary to number comments.

The link could be more obvious, too.

I like to suggest to simply use a slightly thicker separation line between shown comments if there are hidden comments between it. This can IMHO be done by adding an additional CSS class to the comment before or after the hidden comment(s). At the moment border-bottom: 1px dotted #DDDDDD; is used for the separation line (here on Meta.SO). If a hidden comment follows 2px and/or a different color could be used. This way different SE sites can also configure it using their site style.

This way it can be seen that there are hidden comments between up-voted once, which avoids confusion if there is an ongoing exchange with comments where the shown comments don't make full sense on their own. At the same time slightly thicker lines are not intrusive.

You might recall that we tweaked the UI for long comment threads in 2014. During the design and specification stage, we considered a large number of changes, including the some of the ones you suggested:

There are two problems with this:

Put some indicator that there or hidden comments between these two

We actually designed a pretty nice looking method for doing that: 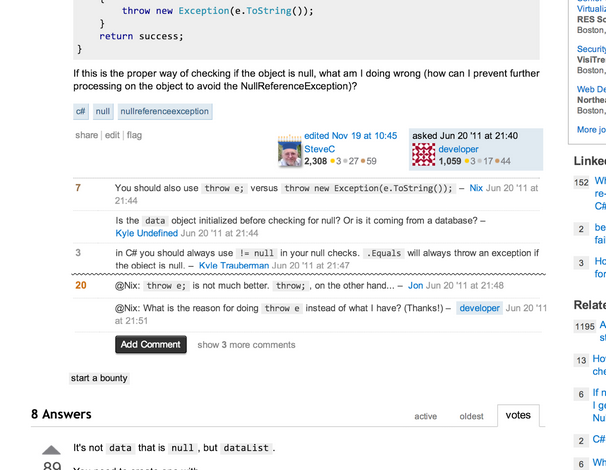 But when we checked with a developer, it turns out this would cause performance problems. (At Stack Overflow, performance is a feature.) The problem is that it's very easy to grab the top N comments:

And it's very easy to get the number of remaining comments:

But it's not possible to predict where the gaps are without loading all the comments and sorting them by CreationDate. For long comment threads, the very threads that we are talking about, page loads would take noticeably longer to stage content we don't expect most people to read. So this is a good idea that simply requires more developer effort than we can afford.

Finally you could highlight the newly shown comments when you hit the unhide comments link like you do when you post your question.

Now this is an idea we didn't consider as far as I know. Since the user has already asked for all comments on the post, there shouldn't be any performance reason not to show which comments are new. So I'm going to bring it up with the rest of the team.

I have added this feature to Stack Overflow Extras (SOX): 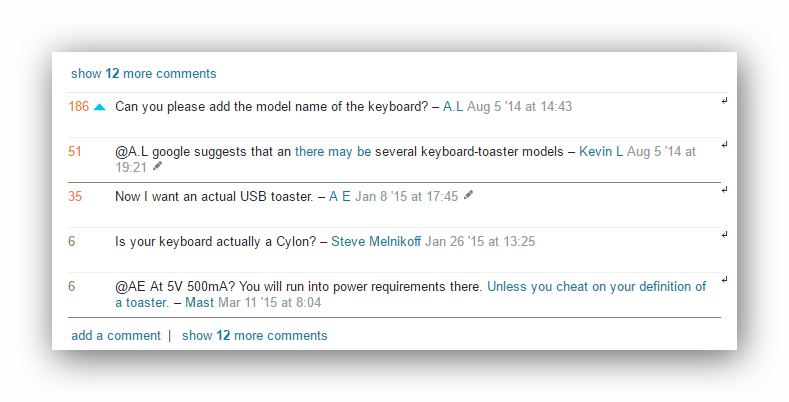 It uses @Martin's idea of a thicker separation line to show the gap.

You can enable this feature (Add a darker border underneath comments if there are some hidden after it) and many more by installing SOX from the above link :)

Currently the 5 most upvoted comments are shown. But since it's rare for a Question/Answer to have more than 5 comments I think that there's no point in hiding comments at all.

Hiding comments on those rare events is confusing. And over all it doesn't help because it's rare.

On the other hand even "only" 5 comments consume a lot of space. So I think that 5 comments are already too much. Furthermore when you realize that there are hidden comments it's difficult to mentally integrate them into the sequence of the ones you've already read.

So one obvious solution is to show only one comment. This way you're still able to read the best rated comment without having to click somewhere. And if you want to read the other comments you can still click on "show X more comments". But it's easier to mentally integrate the 1 comment you've already read into the others. And because now it's usual to have hidden comments it's easier to remember to unhide them before starting to read.

Comments are not meant to be discussion between each other, and for that reason they are not threaded. The best voted comments are shown by default with an indicator at the bottom that there are more comments.

Additional notification that there are comments between the highlight comments is unnecessary, and adds more UI clutter. It is generally obvious if highlighted comments are directed in response to a non-highlighted comment, and those that are curious can certainly show all comments to see the timing of each. This is especially true since people are using the @ notification system.

Further, comments are actually not very common, and more than 5 comments in a given post are not very common given the number of posts on the site. Those that are interested in the full details of discussion on a particular post are easily able to view the whole thing in order with a single click, and are notified that there are more with that message.

Not the answer you're looking for? Browse other questions tagged feature-request status-declined comments user-interface .

3
Why are comment lists abridged in the middle?
8
Highlight additional comments after clicking "show n more comments"
7
Highlight expanded comments
6
Disjointed comment threads ("Add/show more comments")
3
Highlight 'show more' comments
1
When there are "More comments," often the thread is lost
94
Can we have a guaranteed pipeline for responses from Stack Exchange?
50
Proposed tweak to comment UI for long threads
62
Add a 'Show more comments' button to the top of a list of comments
12
Add a setting to allow you to see all comments, not just the top 5
See more linked questions

1205
Encouraging people to explain downvotes
205
What's with all the rude comments recently?
62
Add a 'Show more comments' button to the top of a list of comments
217
Allow flagging a comment after upvoting it
1240
Don't throw away all votes when a user is deleted
414
Add an "I don't understand" option for review audits
135
Hide trivial comments
299
Add optional box for spam flags letting you say why you think it's spam
264
Let's hold language in comments to the same standard as posts
188
Please don't refer to 2019 as 'a great year'