I posted two bounties on one of my questions (Should the questions about the API be posted only on Stackapps (and not MSE)?):

The bounty is correctly displayed next to the answer of Anna Lear, and that's the only bounty displayed: 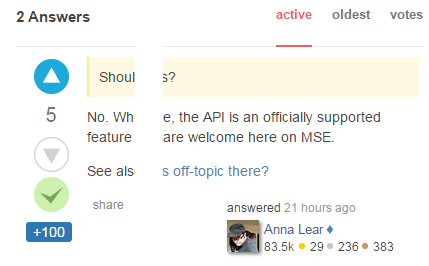 See the Bounties tab on my profile:

According to this tab the user has been awarded the two bounties but:

It seems that offering a bounty multiple times for the same question has caused problems.

The way I read the bounties tab you show us, the only thing bjb568's name mean there is that this user is the last person who performed an edit on one of the posts (question or answer) related to the questions on which you put a bounty. The name is not there to indicate who got the bounty.

So I don't see a problem there.

Not the answer you're looking for? Browse other questions tagged bug bounties expired-bounty .

9
Should the questions about the API be posted only on Stackapps (and not MSE)?

585
How does the bounty system work?
13
Offered Bounties shows two active bounties on the same question
12
Clarification: Accepted answers and automatically awarded bounties
9
Regarding the awarding of half the bounty amount for bounties not awarded within stipulated time
15
Full bounty incorrectly awarded
19
Questions with ended bounties are not being removed from the "featured" tab
92
Changes to bounty rules: removal of double rep-retention, blocking of owner deletion
9
Change the way expired bounties are shown in question lists