What's with the CAPTCHAs?

I was just trying to answer something on SF with answers from Unix.SE, since I was researching the same topic. I did that with an older browser from my old laptop at home.

I was presented a reCAPTCHA with lots of… well, it looked welsh, it did not have any vocals for sure, and some of the things looked mirrored. I hit reload about 40-50 times, tried to enter about half a dozen of them, but was denied.

The audio version sounds like a cross between white noise and moaning to me. Note I'm not an English native speaker, in fact it's only my third natural language I learned, and I learned it mostly read/write, so I could not understand a thing.

I tried another browser, but it just crashed upon loading the site. (Known issue with https in that one, though.)

So I copy/pasted that to my box at work via VPN, logged into it via VNC, and ran a modern Firefox 31 on that. I was, again, presented with a captcha… with nothing to enter. OK, RequestPolicy (something I don't have at home). I tell it to temporarily accept anything, and get a mere checkbox “I'm not a robot”. WTF?

Anyway, posted the answer. But I would really appreciate it if the site engineers could dig out, say, Opera 9.27 and try to use this site with that, every once in a while. And if something can be done about these absolutely indecipherable CAPTCHAs. Now assume I was blind, I could not have posted at all due to the “funny” audio part.

I understand this is not a priority, but please! 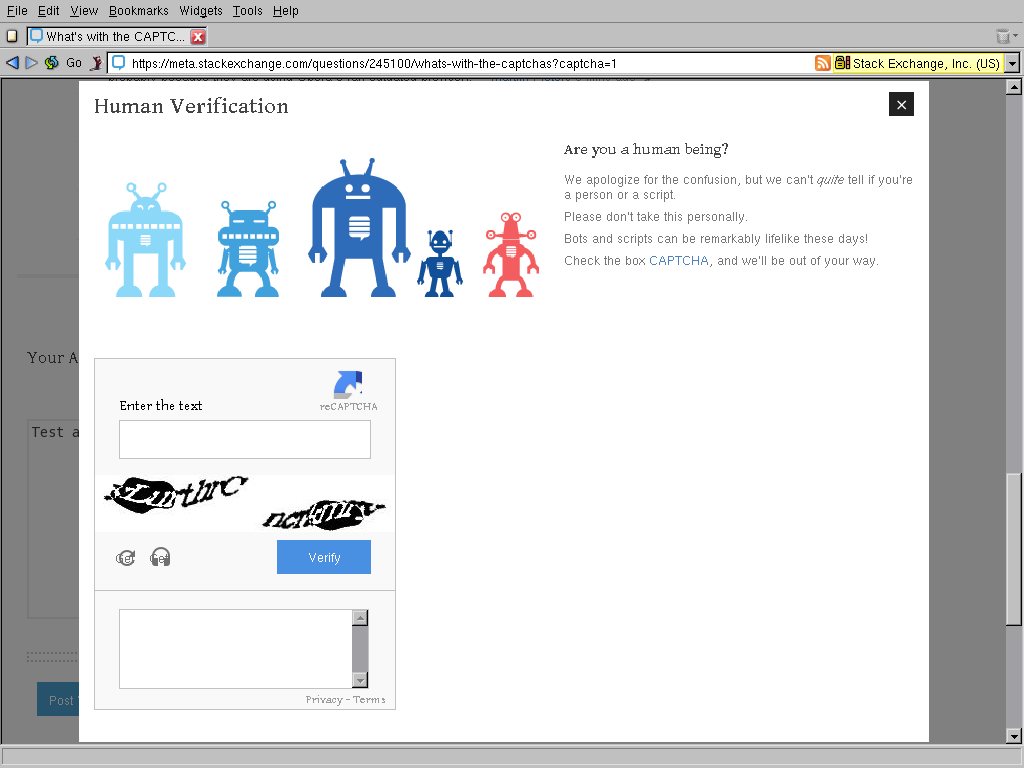 205
Which browsers are officially supported, and what else do I need?
56
Please use the new reCaptcha on the human verification dialog

795
The Many Memes of Meta
250
The homework tag is now officially deprecated
63
Stack Overflow knows I am a robot and greets me in robot language
9
Replacing reCAPTCHA
120
Is SE allowing ads to use fingerprinting to track users?
2186
Firing mods and forced relicensing: is Stack Exchange still interested in cooperating with the community?
672
Firing Community Managers: Stack Exchange is not interested in cooperating with the community, is it?