Can other people see my hats even if I hate them?

I know that even if I hate hats, I still earn them, but does that mean others can see hats I've earned if they go to my profile page? Or does hating hats hide hat hyperlinks?

For all intents and purposes, when you hate hats, you don't have any. So the answer is indeed, no, they can't see them.

For a more detailed answer: The question "Does user X participate in Winter Bash" is made per-site (although in practice all sites except possibly Stack Overflow will have the same decision). A site can have one of three Hat settings:

And a user can also have one of three Hat settings:

If by that logic a user doesn't participate on a particular site, then behind the scenes we still record what hats they deserve, but these are not surfaced in any way. In particular, on the given site

The last point is also the reason that despite its size, Stack Overflow seems to have fairly few hats in the leaderboard at the moment. Right now, SO is listed as having exactly 3000 hats, but in fact there are 16183 hats in the database. Most of these just don't count as existing until the owner has opted in.

Seems to hide the hat links on my profile page as well.

Hats aren't automatically deployed, so even if you've earned them, you still have to choose to wear one. If you haven't done that, you won't show up with hats even for people who don't hate hats.

And if you hate hats, you won't see the option to wear one.

As for whether other people can see them via your profile even if you aren't wearing any, it appears not. Here is what I see for your profile on MSE: 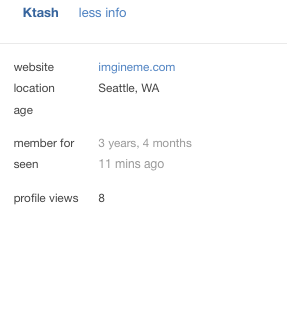 For comparison, here is what I see for someone who isn't so hateful: 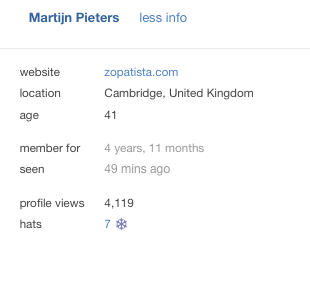 Not the answer you're looking for? Browse other questions tagged support winter-bash-2014 .

489
How does deleting work? What can cause a post to be deleted, and what does that actually mean? What are the criteria for deletion?
704
How do I get attention for one of my own questions without a good answer?
565
How does “Reputation” work?
836
The Many Memes of Meta
802
What are the badges I can earn on each site, and what are the exact criteria for earning each badge?
573
What is serial voting and how does it affect me?
13
How can I see what hats I've earned on a given site?
27
If I hate hats, do I lose them?
949
Firing Community Managers: Stack Exchange is not interested in cooperating with the community, is it?