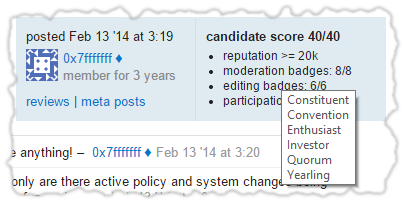 234
Replace accept rate with citizenship level
47
Can we use something other than reputation as the bottleneck for election primaries?
69
Should the number of helpful flags be public to anyone?
80
What are the details on the "candidate score" which shows during an election?
-18
Reduce mod election vote skewing by discouraging passerby users from voting
11
Replacing the candidate score with something better
-3
Beta sites Election reputation cap should be 4k not 20k
1
Key performance metrics for moderators
15
Now that comment flags can be weeded out, can we show some flagging information in elections?
-17
Why Stack Exchange is no longer a fun place for learning and sharing knowledge, and how we can change this
See more linked questions

220
Allow flagging a comment after upvoting it
14
SO helpful flags stat appears under "meta participation" statistics for moderator candidate listings
63
Don't automatically dismiss custom flags (containing a comment from a user)
193
Allow moderators to reply to a flag
31
Helpful flags count in election nomination
53
Allow moderators to see a summary of flags against a user's comments
5
Change flag-summary page wording "moderator attention flags" to "total flags"
299
Add optional box for spam flags letting you say why you think it's spam
80
What are the details on the "candidate score" which shows during an election?