Review overview shows two suggested edits for a long time, but the review queue is empty

Since the icons for recent reviews had not moved, I suppose that these were still the same two items waiting for review, and since phenomenon lasted for half an hour now, I would rule out caching or locked edits to be the reason for this.

After a while, the phenomenon ceased, with one new reviewer popping up in the icon list of recent reviewers.

I had not performed or skipped any suggested-edit review from the queue at that point. 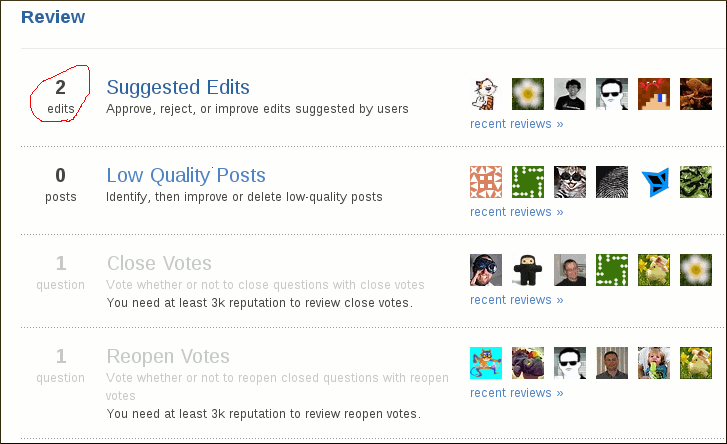 A similar phenomenon occurred for several hours up to 11.04.2015, 11:05: The review overview showed two suggested edits and when I went to the suggested-edits queue, it was cleared. Sometimes, edits that I could review appeared, but two phantom edits remained.

So, these edits might be two tag wiki edits.

Not the answer you're looking for? Browse other questions tagged bug review suggested-edits meta .

1
Why do I have suggested edits to review, but there are none in the queue?
8
Suggested edit still not in the queue after 1 hour
9
Wrong posts number on Review section
4
Review page on Meta.SE — and nowhere else — routinely displays phantom counts with no matching queue entry

296
How do suggested edits work?
417
Decision on rejected edits should be displayed as a notification to the editor
105
Allow non-bumping minor edits, but review them on /review
59
Tell us when the suggested edit queue is full/busy on Stack Overflow
357
Reject an already-approved suggested edit when rolling it back
536
The current review system encourages fake reviews; some people upvote everything rather than actually fixing problems
79
Show the post's comments on the "Suggested Edits" review interface
390
The robo-approvers are killing my will to review edits
189
Can we raise the bar for reputation for late answers to bypass the review queue?