Viewing a post, I inadvertently started creating a comment. I tried to discard the comment by swiping to the left and then tapping on the red "Discard" button that was displayed, but nothing happened. Repeatedly tapping Discard did nothing, as though the app was frozen. The comment that I was trying to discard consists of a single letter, a capital "J". Tapping on the back button (the large "<" symbol) in the upper left corner of the screen also did not work. 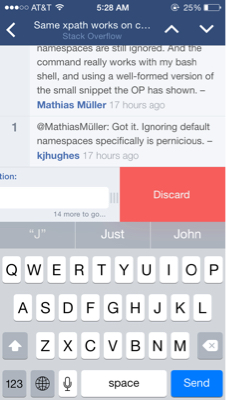