Lots of crashes when viewing questions

My current app version is 1.0.56 but the problems started one or two versions earlier. I guess there were UI changes back then. My device is Acer Iconia B1-A71 (Android 4.1.2).

The app crashes almost every time I open a question, sometimes when starting to scroll down contents and if it is still ok, refreshing a question is too much for it. Big problem is that I have no idea what happens: the app just closes but it does not offer any way of reporting it!

To clarify, Android's own Report problem dialog does not appear after crash and the app is not even debuggable so I can't have a closer look at it using Android Studio either.

Crashes are not specific to any single site in this network. For example this question did crash earlier every time on load but now the crashes are happening only on refresh. Here is an external link to a video capture of the crash

I managed to get some logcat information (level: debug, searched for "marvin"):

I can't get more useful logs out of this. Search using com.stackexchange.marvin or StackExchangeAndroid did not help nor trying to use some process ids.

However, this behavior in addition of Fatal signal 11 (SIGSEGV)... makes me suspect something related to memory or Hardware Acceleration with this Android API level 16.

Okay. Sorry for the long delay, but I didn't want to post an answer until I had fixed the actual issue behind this. For now I'll keep the scope to this specific crash, I'll explain the other issues on the other questions that are related to this.

Here's what was happening:

Our application uses GPU acceleration to render views faster. Straight from the horse's mouth, here's what hardware accelerated views do:

Indicates that the view has a hardware layer. A hardware layer is backed by a hardware specific texture (generally Frame Buffer Objects or FBO on OpenGL hardware) and causes the view to be rendered using Android's hardware rendering pipeline

What was happening when the app was quitting without any sort of error message was that the texture the view was generating was simply too big to fit in the buffer. So, to stop this specific outcome I did the dumbest band-aid possible: We disabled hardware acceleration on posts when a device was running a version of Android <5.0, because this looks to be a bug that only occurs in the WebKit backed WebView, not the new fancy Chromium backed WebView in Lollipop. Boom. Your issue went away, but the fact that it was no longer crashing caused an even uglier bug to be shown to more people. Read my answer on that post for more information.

I have this issue too. The app is completely unusable on my device. It crashes constantly to desktop when loading questions. Profile and feed are working fine, until I tap on the question or notification in the feed. It results in the hard crash (no crash pop-up) almost every time. While I understand that it's probably due to the MTK buggy OpenGL driver (libGLESv2_mtk.so), I've never seen this in other apps.

Full logcat log is on pastebin. Here is relevant part:

I also have had this exact problem for over an year, but only thought of searching about it now. I am not a power user like the others who posted in this question; my phone does not have root access; I don't know about taking logs or anything. But let me describe exactly what happens:

There are essentialy three different situations in which the app force closes: when scrolling down a question; when refreshing a question; and when loading a question. The latter is the one that happens more often and bothers me most. (I don't remember a single crash when scrolling up - if it ever happens, I will edit here).

Whenever I say "crash" or "force close", I mean the same thing: the app closes suddenly, with no warning or error message, and shows me the phone's desktop)

Scrolling down a question

In the fortunate cases in which the question loaded properly, sometimes it will crash when I scroll it down. I've noticed that the faster I scroll, the higher are the odds that it will crash. Especially if I'm reading a math question with a lot of MathJax symbols.

I don't have many details for this one. Sometimes the question loaded well, but when I refresh it, it crashes. I think this happens more often if the question lagged a lot when loading, but take that as a guess - I don't refresh questions too often to have a big statistical confidence/reliability.

This is the one that bothers me most, and the things I'll mention below are not just things that happened once or twice. You can take this information with high statistical confidence, since I'm not afraid to say that I've seen a question crash at least five hundred times now, probably one thousand.

In short, there is usually a lot of lag when loading a question, and many times the app crashes during the loading. I guarantee this is not related to the condition of the internet connection in any way, because I've been using this app in many different locations and internet conditions and never noticed a difference.

When I click to open a question, whether using the 4x1 desktop-widget or opening the app first and then clicking on the question, one of the following happens: 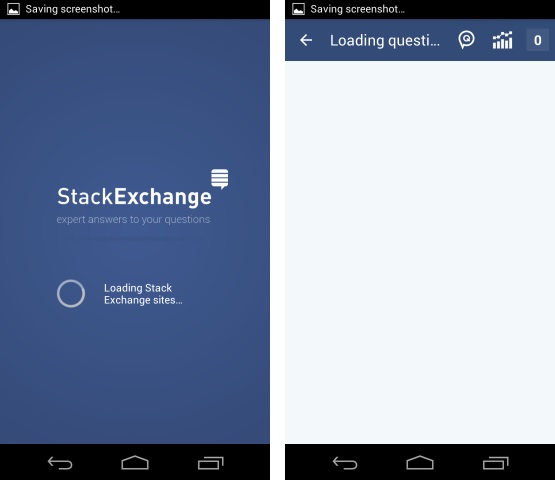 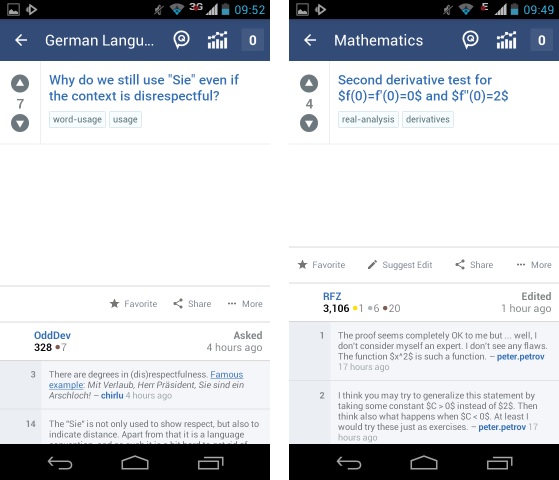 I have a Motorola Razr I (as known as XT890). Android version is 4.1.2. Stack Exchange app version is 1.0.83. A friend of mine also uses the Stack Exchange app on a different device, and he never experienced this force closing, not a single time. It is unfortunate that this depends on the device...

By the way, I think the status-completed tag should be removed, since it's still happening for me and most likely for more people.

23
Android app intermittently shows blank body in questions and answers (multiple sites)
13
How does one report a bug for Stack Exchange Android app?