Help me make myself a better moderator—give me statistics about my own close vote accuracy!

In a recent answer on Meta Stack Overflow, Shog9 made the following note:

Accuracy is all over the map too. Some of our most prolific close voters routinely toss votes at questions that don't get closed in a timely manner - or at all.

I realized something—I don't actually have any idea what percentage of the questions I vote to close actually get closed. My ability to cast close votes is relatively worthless if I just splatter close votes everywhere like buckshot.

We don't want people throwing close votes willy-nilly—we want them to be snipers, shooting down the terrible questions like a well-oiled machine. Unfortunately, currently, it's extremely hard for a user to determine if their perception of what should be closed matches up with the rest of the userbase's.

Clearly, this data is available. It's just not accessible to the average user. I don't think this data should be public to anyone who wants to look at it, but I do think it would be extremely helpful for someone to view their own close vote history. 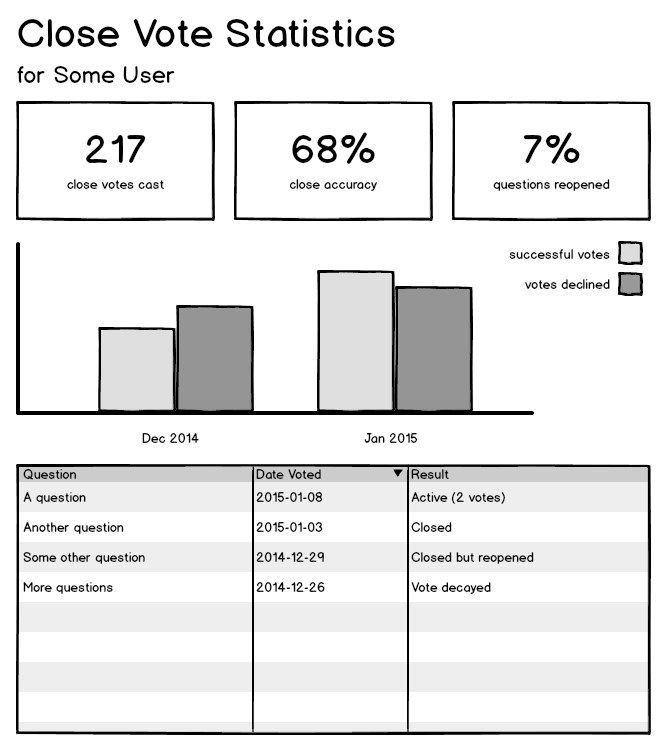 Sure, this wouldn't help people who weren't interested in taking the time to look at the stats. But I think some people would be, and it would make them much more effective at closing wisely.

It's possible to find an estimate1 of your close accuracy yourself thanks to @rene.

1 This isn't 100% accurate though since the SEDE query doesn't count now deleted questions that you voted to close. So in reality, most users actual close accuracy would be higher than the one produced by this method. Although2

2 On re-examining this, I think the /votes/closure tab doesn't show the questions that were deleted. At least I wasn't able to find any that said "Page Not Found" when I opened them. So maybe this is a 100% accurate method to find your "close accuracy" or close to it. Note: I have less than 10k on SO, so maybe that's why it doesn't show/count the deleted questions in the /votes/closure tab for me, but does for users with greater than 10k. So the query/method would be a lot more accurate for users with less than 10k, and possibly really inaccurate for >10k'ers.

With that said, I strongly agree with your feature request. It could have the possibility of getting users who cast close votes on questions that aren't likely to be closed to better use their limited amount of close votes for a bigger impact overall. It could also hopefully entice users that don't close vote as much to do so more. But at the same time, it's possible some users may be discouraged from participating more in close voting if they have a low close accuracy.

Not sure how much use the reopen stat would be, it's good trivial information to see, but it doesn't really tell us much of anything. It's good to have questions you voted to close reopened, which means the user took the advice of the close reason and then edited their question well enough to be reopened. That is much more likely for most close voters I'd say than voting to close incorrectly.

The proposed measures really measure agreement with other users rather than the inherent close-worthiness of posts you've voted to close, since they're all based on the consistency of your close vote with close and re-open votes by [mostly] peer users. Because it's based on consistency with other users, it says at least as much about the context of the users around you as it does about your own accuracy.

Review of these lists by people with Moderator Tools access could give them some insight into cases the community disagrees about and could also suggest posts that deserve further review. In addition, if you find anything you've voted on in one of these lists, it can be a cue to you to give the post and the reasons for your vote more thought, or to defend your point of view to the disagreeing community members.

Part of the goal of voting to close is to educate the OP and help them to improve their question. When you cast a close vote the OP can see it, if they have sufficient rep, ideally when that happens they will make an appropriate edit and salvage the question. Or someone else may see a poor question and edit in necessary information, improve clarity, etc. and bring it back from the brink of closure.

In either situation at the time when you voted to close the question it deserved to be closed and your vote was accurate. Later on someone improved the question, making your vote invalid.

It would be really hard if not impossible for the system to account for that.

Not the answer you're looking for? Browse other questions tagged discussion feature-request vote-to-close personal-statistics .

89
New 10K tool: question close statistics
110
What are the moderation tools available to 10,000+ reputation users?
62
What exactly happens with the button "Leave Open" (previously "Do Not Close")?

550
How about a "Vote not to close" option to counter the "Vote to close"?
79
Help us make "Off-Topic" close reasons clearer to the OP
258
Closing changes: [on hold], unclear, too broad, opinion-based, off-topic reasons, bye-bye to Too Localized
418
Add an "I don't understand" option for review audits
106
Age close votes after 14 days, regardless of views, allowing recasting
420
Can a machine be taught to flag spam automatically?
188
Testing three-vote close and reopen on 13 network sites