A story about trying to submit a bug report in the Android app:

See also Can't report a bug in the Android app from the Android app itself where the asker tripped over some of these problems and didn't figure out the Meta SO/SE subtleties.

While this question overlaps that question, please keep in mind that I'm trying to report bugs and usability bugs here, and I still don't know why the posted questions weren't viewable.

See also https://meta.stackoverflow.com/questions/285958/horizontal-scrolling-broken-by-vertical-motion which is the bug report I managed to submit. It probably belongs on Meta Stack Exchange instead of Meta Stack Overflow but I don't know how to move it and I've spent too many hours reporting a bug.

Whew, this bug report was beautiful. There were so many bugs to fix in here. Let's start from the top.

When you go to the About screen, there will now be three big actions available: View existing bug reports, submit a bug, submit a feature. 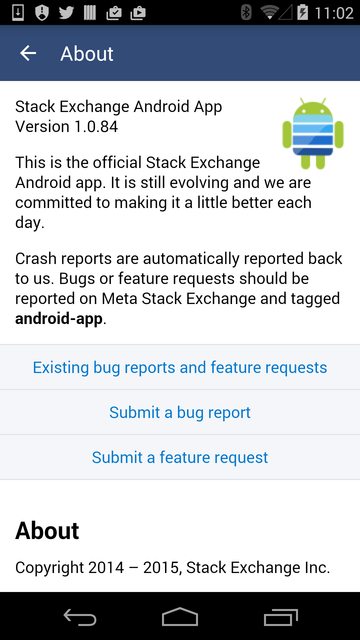 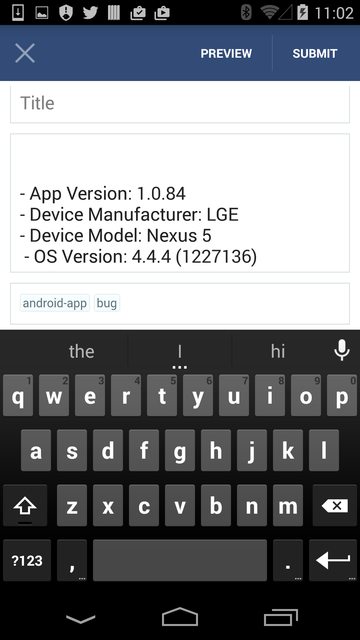 9
“This question is not available, it may have been deleted” when submitting a question on the Android app after losing internet connection
6
Can't report a bug in the Android app from the Android app itself
7
Only successful question posts should count towards rate limit
0
Android app posts bugs as a post in meta
1
Android adds new answer instead of comment

302
The future of meta.stackoverflow and meta.stackexchange
5
Android App cannot handle redirection after MSE/MSO split
45
Why has Stack Exchange stopped working on the Android app?
715
Dear Stack Exchange: a statement and a letter from your moderators
577
We're switching to CommonMark