In the spirit of:

The same should be done for comments by the offending author for that post as well. If the post was considered spam or offensive, what possible redeeming quality could the comments of that post by that same user have?

If such a comment was useful enough, then the post could have been edited into shape and possibly saved. But if the community went through with it and got the post deleted, then it's unlikely the comments would be considered constructive or have any use. Maybe take into account that the user account was deleted too? 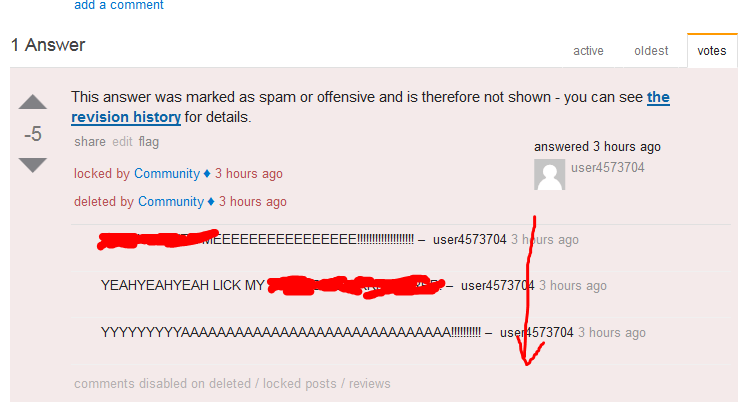 Yeah it's not visible to most of the public... but it's just a minefield for 10k users.

I'd say the real problem is not that the comments aren't deleted, but simply that they are shown (to 10k+ users) by default.

The SE user interface already knows how to hide excess comments, and to reveal them when the user clicks a "show more comments" link. We should simply apply that same feature to author-written comments on spam / offensive posts.

(Ideally, the "show more comments" link text on such posts should also be changed to indicate that some of the hidden comments may be offensive. But even without that finishing touch, just hiding the comments at all would still be an improvement over status quo.)

Update: I wrote a simple client-side implementation of this feature for SOUP. (It's in the v1.29 devel branch, if you want to try it.) For those interested, here's the code:

It works by locating any deleted answers with hidden content, hiding any comments they may have, and then calling the SE comments UI to tell it that there are new comments to be loaded, thus enabling the link to do so. I was originally going to hide only those comments posted by the answer author, but locating those reliably turned out to be surprisingly tricky.

To avoid the comments being briefly visible while the page loads, the fix also includes a CSS rule to hide comments on all deleted posts, which is disabled once the code above has successfully completed. This may cause comments on deleted posts to show up with a slight delay, but that's probably acceptable.

Ps. Here's an offensive-flagged answer with (not particularly offensive) comments for testing. Took me a few minutes to find one, so I thought I'd save everyone else (and myself, later) the trouble. And here's a non-offensive deleted answer with lots of comments for comparison.

I think that if the community can go through the trouble to close a question as spam, they can at least look at the comments. Not only your example, but I have seen spam comments on non-deleted posts by other users. It seems a lot of people will read a question, and the answers, and nothing more, instead of flagging/deleting them as spam as they should be.

Not the answer you're looking for? Browse other questions tagged feature-request flags deleted-answers 10k-tools offensive .

71
Destroying a spammer does not delete their comments
27
Obscure the title and text when question is deleted by Community from spam/offensive flags
15
When hiding contents of spam answer, also hide or delete the comments

283
What are the “spam” and “rude or abusive” (offensive) flags, and how do they work?
1171
Don't throw away all votes when a user is deleted
40
Remove links when a post is deleted by Community from spam/offensive flags
35
Comments and posts auto-deleted by community flags should be shown to moderators
178
A question should not be deleted by the user deletion algorithm if it has upvoted answers
295
Add optional box for spam flags letting you say why you think it's spam
406
Can a machine be taught to flag spam automatically?