Include question title when sharing to Twitter from Android app

I am a user of the SE Android app; I recently came across the share feature and liked it a lot. I have tried using it with Twitter, but I feel in addition to sharing the question URL it should also include the question title in the share. Currently the share only includes a link to the question and does not have any detail of the question itself.

Though a share user can include details of question himself, it would be more intuitive and user friendly to just tap and share entire question with title of question and link.

tl;dr: there's a question at the end of this answer, help me answer it.

The main reason we haven't put the title in the message field and just combined the two is a purely selfish one: I routinely use the "Copy to clipboard" option in the Share dialog and it not just copying the URL is one of my biggest Android pet peeves. Most other apps do what you are asking for in this scenario, copy both the title and URL to the clipboard (since that's also what would be sent over as the tweet body). 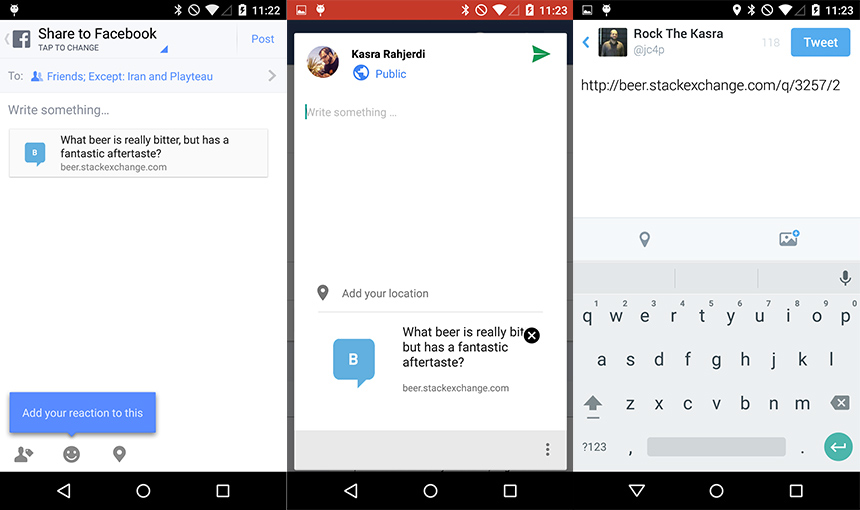 As you can see, they all react differently to the share request. Facebook and Google+ actually ignore the fact that what we told them to share was the URL, and embedded the URL in the post instead alongside a empty by default caption for it ("Write something...) -- Twitter on the other hand does the simplest operation and flat out jams the URL we're trying to share into your tweet.

Here's where it gets worse. Let's hit "Tweet" on that draft and see what it looks like now: 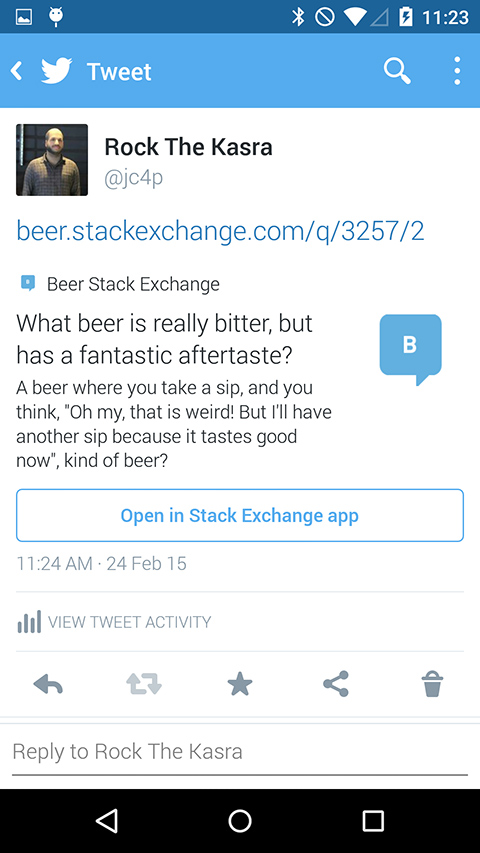 Look at that! Twitter actually one-boxes/embeds the question into the tweet, while still showing the URL of it as the tweet contents, something that's not visible to you at all while you're actually composing the tweet.

Anyway, in summation: Everything is not coming up milhouse -- Sharing kind of sucks on Android. However, if we can get this question answered (post in the comments!) we'll do it:

If we change Share to share the title of the question alongside the URL to it, we'll get duplicated question titles on Facebook, Google+, and the expanded view of a tweet. We'd also have "Share to Clipboard" have both the URL and the title on it. Would this be preferred to what we have now?

Not the answer you're looking for? Browse other questions tagged feature-request android-app twitter .

4
Please include question title in title of revision history pages
74
Privacy leak in permalink?
19
Can the Twitter link on non-trilogy sites stop the title before 140 characters are used?
6
Please implement Twitter sharing of questions on mobile design
193
Allow us to vote to delete from the Android app
5
Copy link address from Android/iOS app
2
App crashes when tapping the back button, immediately after tapping “Favourite”
273
Make moderator messages anonymous