There's no guidance in the help center for retracting close votes

I've seen a few questions around here about retracting close votes, and they bring up two primary points:

The request to allow close votes to be retracted was completed back in July of 2013. Since then, there's been no real mention of the feature at all. In all my searching outside of Meta, the only place the word "retract" even appears is in a Podcast blog from that month, which I imagine not a large portion of our user base even saw.

Worst part of it is, it's not even mentioned in the help center! 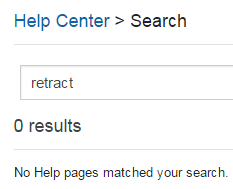 Just to be sure, I visited the cast close and reopen votes privilege page and searched for the word "retract" there too - still nothing.

So how are we to expect people to use this feature if we've never told them about it? Can the existence of this feature be made more well-known to users? I don't mean just making the UI more obvious, but making sure that documentation about it actually exists in the appropriate places.

I would go so far as to say adding a badge to advertise this feature may be useful. A simple bronze badge for retracting a close vote, possibly after the question has been edited, to teach users that the feature exists and how to use it. Retracting invalid close votes is definitely something we want to encourage, and we're very far from encouraging it right now.

This is included with a couple of other updates to the cast close & reopen votes privilege:

It now reads as this:

Not the answer you're looking for? Browse other questions tagged feature-request status-completed vote-to-close help-center retracted-close-votes .

848
Can we have the ability to retract a close vote before it closes?
101
Age close votes after 14 days, regardless of views, allowing recasting
28
What Happened Here? Voted to Close 4 Days Ago, but No Close Votes Today?

527
How about a “Vote not to close” option to counter the “Vote to close”?
848
Can we have the ability to retract a close vote before it closes?
329
Distinguish close votes by reason
1217
Don't throw away all votes when a user is deleted
16
Retracting close vote does not refresh tally
88
Allow another close vote after retraction
81
New bronze badge for using a filter on the Close Votes review queue
248
Increase close vote weight for gold tag badge holders
342
New UI encourages askers to confirm or dispute duplicate votes