This morning I checked the iOS app and saw the following: 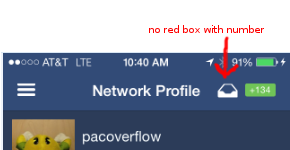 This will be fixed in the next build. If notifications are turned off the only thing driving the inbox count was realtime messages, which weren't sent if the app wasn't running.

I've changed things so that whenever the app becomes active it reloads the inbox data store and updates the unread count to the number of items where isUnread == YES.

Not the answer you're looking for? Browse other questions tagged bug status-completed notifications ios-app .