Should we change the positive asking record criteria for the Curious badge set?

Poking around the people's profiles to see how the new activity page looks I keep seeing things like this: 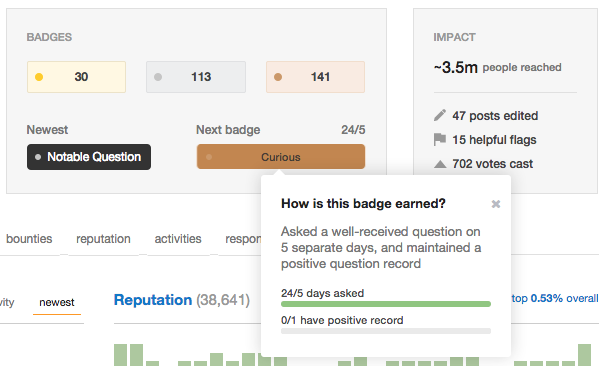 It looks strange to have a 25/5 progress on a badge, but the dialog explains that what this user is missing is a positive record of asking. The formula is:

If you look at this user's questions, it's hard to see how his asking record could be anything but exceptional. According to SEDE his asking record is 0.875. The problem is that he asked many of his questions in the early days of the site that were well-received, but later deleted. Some were deleted after the question was migrated to another site.

My suggestion is that we change the asking record formula:

The early deleted variable counts only questions deleted within 60 days of being asked. I picked 60 days because it's the dividing line between being able to keep reputation and losing it. After looking through the list of people who would get the Curious badge on Stack Overflow with this change, I noticed a few things:

Proposal: For the Curious, Inquisitive, and Socratic badges, don't count questions deleted 60 or more days after asking as deleted for the purposes of calculating asking record. These questions may still count as negatively scored or closed, if applicable. Days that include deleted questions, no matter when they are deleted, do not count toward the days asked criteria.

On Stack Overflow, that would add about 665 Curious badges, including two more for moderators (casperOne and 0x7fffffff) and one for an employee (Oded). On the opposite end of the reputation scale my spot checks are a bit muddier. Instead of a small number of deleted (and usually closed) questions, this list turns up users whose latest questions still aren't all that interesting. Even so, on balance a few extraneous bronze badges seem worthwhile in exchange for acknowledging truly curious users.

status-completed some time ago, but closing the loop here. We don't penalize (count) closed or deleted questions if the closure/deletion happens more than 60 days after question day.

This is also documented in the meta post What are the badges I can earn on each site, and what are the exact criteria for earning each badge?

3
badge progress tracker bugged
697
Help us test the shiny new "User Activity" page! (Plus a bunch of new features.)
836
What are the badges I can earn on each site, and what are the exact criteria for earning each badge?
176
Asking days badges
54
SO's lack of documentation
6
Why am I not being awarded the curious badge?
2
When does the question ban get applied?

1002
Show all of my question/answers to me even if they are deleted
207
The generalist badge should be gold
836
What are the badges I can earn on each site, and what are the exact criteria for earning each badge?
1261
Don't throw away all votes when a user is deleted
176
Asking days badges
6
Why am I not being awarded the curious badge?