Detection/fix for the hanging close bracket of a code block

I cannot recall how many times I have edited questions like this (look at the bottom part in red).. 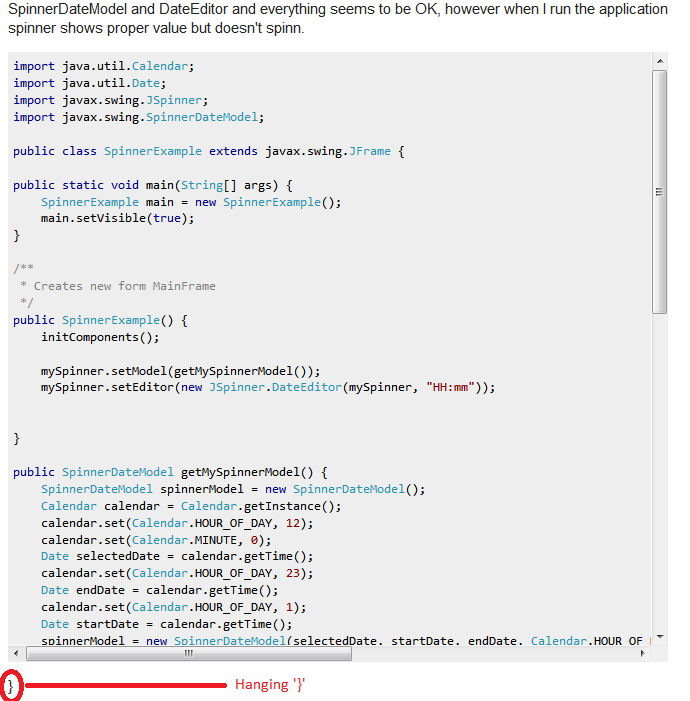 Down there at the bottom is a } that should obviously have been included in the code block.

I wish code posters would check the preview of their question, notice the problem and fix it, or maybe look at the edits made to their question and take on board the changes. But if wishes were horses, no man would walk.

What I would like to see is a check for a line after the high-lit code that:

And then on detecting such a condition, either:

As rene adroitly pointed out in a query for dangling close brackets - there are over 5000 instances of this since the beginning of the year. And that number is counting only the ones that have not already been fixed by editing!

I disagree that the hanging } is typically simply forgotten. If this were true the typical fix would be highlight that one line and press {}. It's not. Much more often all the code will need it's indenting fixed on many lines. Rarely it is enough to highlight it all and press {} once. Most typically lines need individual attention. This is what sends me reaching for an external editor.

I think prompting the user when a } is left alone on a line is a great idea.

However automatically adding spaces to the last line is a horrible idea. It would confuse users who didn't expect this change. It would conceal the bigger problem that now has to be fixed with both the user and this auto-correction both taken into account.

Not the answer you're looking for? Browse other questions tagged feature-request code-formatting editor .

551
How about a "Vote not to close" option to counter the "Vote to close"?
854
Can we have the ability to retract a close vote before it closes?
7
Add feature to WMD for re-aligning code blocks
222
Introduce a "general reference" close reason
3
<del> in code block
11
Detect attempts at disguising meaningless text as code blocks
528
We need "assume good intent" back in the Code of Conduct
311
Goodbye, Prettify. Hello highlight.js! Swapping out our Syntax Highlighter