Is there a way to configure your Stack Overflow account so that you receive notification emails when posts are made to specific tags?

Or do you simply have to log on to see new posts?

It's not email, but it's just as in your face as you want it to be. 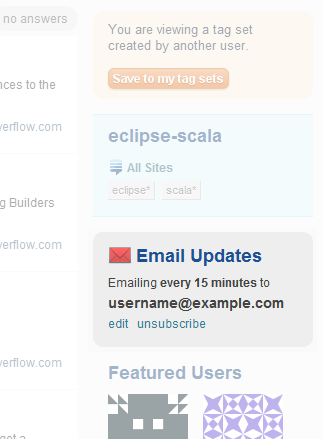 Remember that Tag Sets work across all Stack Exchange websites -- so you are not limited to a single site.

In addition Jeff's answer, you can also subscribe for email updates for your favorite tags without having to leave your particular exchange to visit stackexchange.com (not sure when this was implemented).

Simply hover your cursor over the tag that you want to subscribe to, and a little popup will appear: 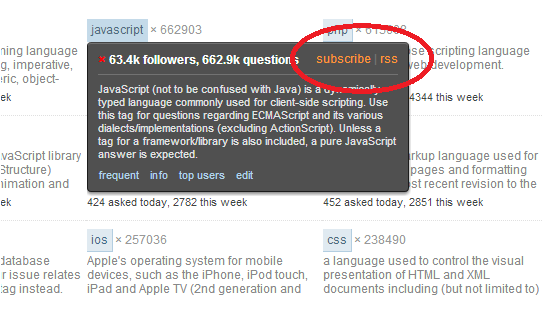 Visit your email inbox, and click on the confirmation link in the confirmation email, and that's it! I'm not sure if this method will allow you to subscribe to email alerts every 15 minutes or 3 hours though (like in Jeff's method), I think it might be set to a daily frequency.

@random is exactly right, but if you still want email notifications on top of RSS, you can easily set up a FeedBurner feed - just grab the feed address, sign in with your Google account to FeedBurner, paste the address in, and under the Publicize tab, enable Email Subscriptions. Of course, you can set up email delivery times, branding, etc. I use this a lot for all the feeds I want to keep track of - I just always forget to open Google Reader...

(Sorry if this is inappropriate to write a response as an answer, a comment is too short, and someplace else it was indicated that adding answers is a way to vote up an issue.)

I just tried it -- it's a very weak solution. First, it takes about 327 steps to get email notifications this way:

Sure -- some people are always glued to their readers; but some are just as glued to their emails, spending time to make sure that all information flows through a single channel makes it very convenient to keep track of everything.

And note that I did read through some of the explanations. "Efail" seems to be a complaint about emails from people -- the kind of messages that you need to reply to and feel bad if you don't. Notification emails are not in this category. There was also a point made on how wonderfully flexible readers like google's are at filtering feeds etc -- I've used it (g-reader) a few times, and it has far, far less ways to filter feeds. I mean, come on, are you serious?? -- this should be a place for hackers, are you really comparing a feed reader filtering capabilities to the stuff that you can do with email?? Give me a few short lines of procmail, and I'll make my computers dance around your readers. Even that feedburner thing is basically just a lame metaphor for email forwarding, only adapted to feeds -- and it's that much more difficult to use it than to set up a forward using practically anything.

So yes, feeds can be awfully convenient -- but email is far more flexible in terms of what you can do with it. Comparing the two is like hearing an iPad user try to convince a hacker that there's no need for desktops and laptops anymore just because the iPad does everything iPad users will ever want to do.

To tell the truth, I originally though that the real reason SO etc avoid emails is to lower network and maintenance costs. But neither of these make sense: there's almost zero maintenance for outbound emails, and surely the constant requests for feed updates is much greater than sending out emails when an event like a new question happens. I could probably even measure the number of notifications I would get times the size of such a note, vs the load of my scripts running every few minutes and mostly get a bunch of data only to conclude "nah, nothing new".

The current address for this kind of notifications is https://stackexchange.com/filters/

Not the answer you're looking for? Browse other questions tagged feature-request status-completed tags feed email .