Suggest migration sites based on reputation at destination [duplicate]

Migration flags and votes should be removed from the close menu. Instead, along with "share, edit, close, flag" at the bottom of the question, there is a "migrate" option. When you click this, you will always have the option to migrate to that site's Meta page.

Beyond the meta site, however, the migration options are limited to sites for which you have a user account on (and there should probably be a soft-search menu in here for our particularly eclectic users).

Currently, if you try to vote a question to migrate away from Stack Overflow, you are presented with the following menu: 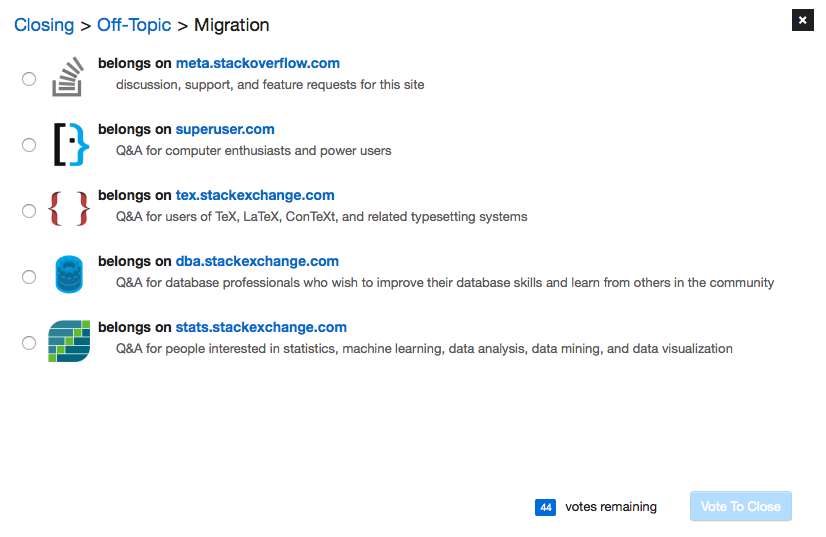 And it doesn't matter who you are, these are the five migration options you get.

And the fact of the matter is, I know I personally shouldn't be allowed to migrate to TeX or Stats. I don't have an account on either of these sites, nevermind having in the slightest clue what sorts of questions on are on topic there. Meanwhile, I do have a Super User account, and I do have a DBA account, but I have exactly 101 rep on both of these sites. I've never asked a question, posted an answer, or even so much as left a comment. I think I only created an account on these sites because I was thinking about asking a question or I wanted to upvote someone's answer (I have a use for these sites, but not much to contribute).

Meanwhile, there are other Stack Exchange network sites that have some potential for overlap with Stack Overflow.

But, I don't think all of these sites should be in the list either.

Compared with another feature request, I am primarily talking about the list of migration targets being dynamically generated for each member based on which other sites they are members of. If you don't even have an account at the target site, how can you possibly know that this question is better suited here than there?

60
Require minimum reputation on the target site for migration
54
List of migration sites should be dynamic, based on reputation at destination
-9
Binding voting for migration closures by high-rep users

1193
Encouraging people to explain downvotes
849
Can we have the ability to retract a close vote before it closes?
842
Allow an edit to notify downvoters: “I think I've fixed the issue now - please check”
962
Show all of my question/answers to me even if they are deleted
256
Reset votes on migrated questions
1230
Don't throw away all votes when a user is deleted
114
Add a “don't migrate crap” migration 'path' to all sites
181
A proposed philosophy of question migration