I would like to see some sort of site-based weighting for the "top network posts" section on the new profile page. Right now this is a list of top posts by raw vote count without any other influences, so naturally it's going to show posts from the largest (or most-voting) sites I participate on. Yet I've made contributions that, by the standards of their communities, are way more significant ("top") than some of the posts on this list. The site where I have the most posts and am also a moderator doesn't show up on my list at all; that feels wrong.

This is not an accurate representation of the value I've contributed across the network: 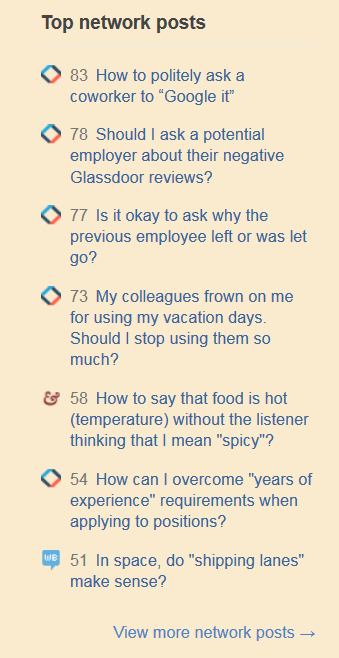 I know I can exclude whole sites from the list, but that's not what I want either -- I'm looking for better balance, not wholesale exclusion. The Workplace should have proportional representation in my list; it just shouldn't be nearly all of it, given my other activity on the network.

I would like to see posts here be weighted by some measure of per-site activity that reflects voting (average score/post for the site, maybe). We already have this for the Hot Network Questions list, which without weighting would be dominated by Stack Overflow. Can we do something like that here, too?

I'm not suggesting that this be calculated in real time every time a profile is loaded; that would be way too much load on the servers. A job that runs once per day (or even once per week) that updates a table of weighting factors would be good enough. Unlike top posts on the current site (where the profile is being viewed), this needn't be completely up to date.

As pointed out by Shadow Wizard in a comment, this would make the scores confusing because they wouldn't be in order. I suggest just removing them.

Finally, I understand that the current ordering has always been in place on the network profile, and is what people will see if they click through to that. I'm not asking to change that; I'm just asking that the "first view" of a user active on many sites with highly-varied voting activity be adjusted to more-accurately portray that user's activity.

This is reposted (at Oded's request) from the bugs-and-feedback post for the new profile page.