Are there any good/notable questions where the Stack Exchange model failed?

I'm wondering if there are any notable instances across the network where the model has spectacularly failed. The criteria I'm curious about are:

Of course, I didn't say "well known examples", because if an answer was "well known" to be incorrect, it would likely right itself unless it was a concerted troll vote or something. Just something that you, personally, as an expert have noted to be objectively incorrect, but couldn't be corrected merely via your own comment, answer, and/or downvote.

Some may wonder if I have an agenda, but not really. I'm not looking for any examples so I can point and say "ha, the model doesn't work!" I'm just curious, and I think maybe we can learn a bit if we look at the characteristics of cases where it's failed and become better for it.

My running hypothesis is that any instances will be ones that, while they have a verifiable correct answer, nonetheless push certain buttons of a subset of field experts. That or a manifestation of the Fastest Gun in the West Problem where a surreptitiously bad answer stayed on top due to sheer inertia.

I don't know how "spectacular" this is, but I think it meets all your criteria:

The question is manifestly on topic for its site, has no subjective element that I can see, is reasonably old and, while not voted on much for its age, is certainly not negatively-received.

The accepted answer is at -47 and has never been edited.* 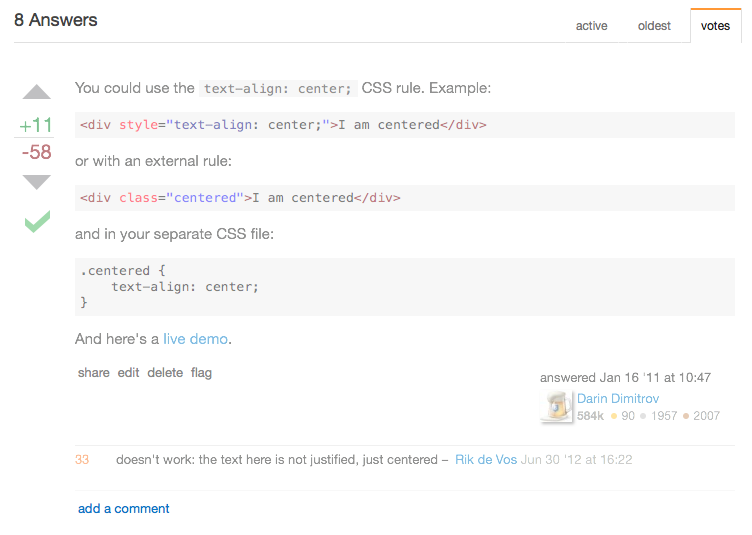 I found this using the query is:answer isaccepted:yes score:..0 on Stack Overflow, sorting by votes, and going to the last page of results. (The score:..0 syntax finds posts with negative score.) 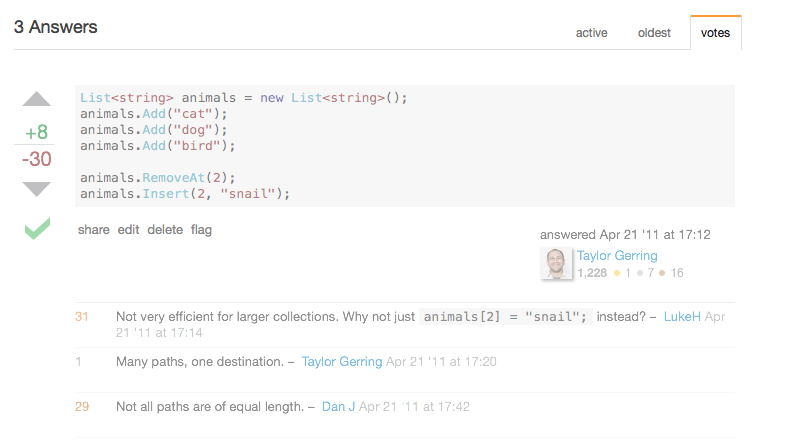 *And as an amusing bonus is owned by the #2 user on the site by reputation!

I think ELU's single-word-request tag has a mixture of the fastest gun in the west, halo effect, and herd mentality.

I find it a little frustrating.

Sometimes I'll see one I can answer in the hot questions list. I go there, quickly read through a gazillion posts and comments to see if it has already been suggested, and then post my suggestion if it hasn't.

Usually by the time I see and answer the question there are already 10+ answers, and often 100 votes have already been issued. The most I've gotten with a not so late answer is 15 votes. I see other (far from wow!) answers with 50 - 100 votes because they answered super quick.

I can confidently state that no user that's just bouncing around the hot network list is going to spend the time to read all of the answers on those posts, and users who've already voted probably don't return very often (especially if an answer was accepted).

I've been back to check on said posts, and on many the views move very slowly. This leads me to thinking it could realistically take years for late buried answers to be properly recognised, if ever.

Even when new users come across it, they're likely to see the accepted answer and top voted answers, and are unlikely to venture down to the single vote answers because it's tiresome, and the value of the page was supposedly presented to them at the top, with the heavily upvoted answers.

On top of all that there's also a more important question, should non-English speakers be able to influence the final outcome/overall result of an English language topic/question? That same question could be abstracted to many SE sites.

How is it possible that I can know nothing about Information Security, but I can vote on what my completely amateur view of the correct answer is?

Maybe there's some merit in limiting vote types on specialist sites, such that maybe only people who've earned rep on that site can vote on answers, but anyone can vote on questions. Reasoning: anyone can ask a question, or want to know an answer to something, and can agree with that question being asked. On the other hand, not everyone knows the answer, and should not be able to influence the outcome based on zero knowledge.

There is also a high risk of perpetuating myths/incorrect information when entirely incorrect answers get posted early, heavily upvoted, and even accepted before another user can set the record straight.

Essentially, the signal-to-noise ratio for late answers on single-word-requests, and other hot network questions of late is poor. In a nutshell, I think it's due to non-experts skewing answer scores.

1465
Fastest Gun in the West Problem
2
Is there a way to search for those questions that have only negative votes?