Visual feedback when uploading images through the Stack Exchange app

Since version 1.0.52 of the Stack Exchange app we can add images to our posts. After selecting an image the app uploads the image to the imgur servers, obtains the image URL and then inserts the markdown code to reference the image.

All of this works very nicely except for one issue: There is zero visual feedback that the app is currently uploading your image, or is even doing anything at all!

I first noticed this when I had bad reception. After waiting several seconds I thought something broke and since the markdown bar was gone (see note below) I hit the "back" button (which apparently canceled the upload) and tried again (more than once) until I realized what was going on.

A simple "uploading image..." box (maybe even with the option to cancel) would make things more clear.

Note: There is also another rather odd behavior which seems to be associated with the lately fixed bug that caused the markdown bar to not appear until one starts typing in the text box. Currently the bar is being shown when giving focus to the text box but it disappears after selecting an image. After the image upload is done and the reference to the image is inserted the bar appears again, so I guess this behavior would be perfectly fine with the addition of visual feedback during upload.

Taking a queue from iOS and the web, we'll use a cancellable ProgressDialog to show that the image is being uploaded: 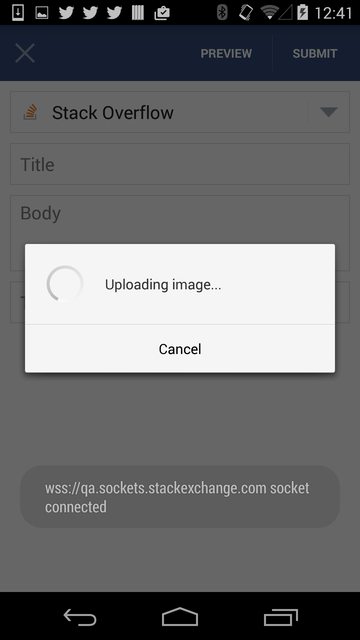 This should be applied. Even though I don't even know how to write a userscript :0, the Uploading... thing is currently used in the new-nav image uploader: 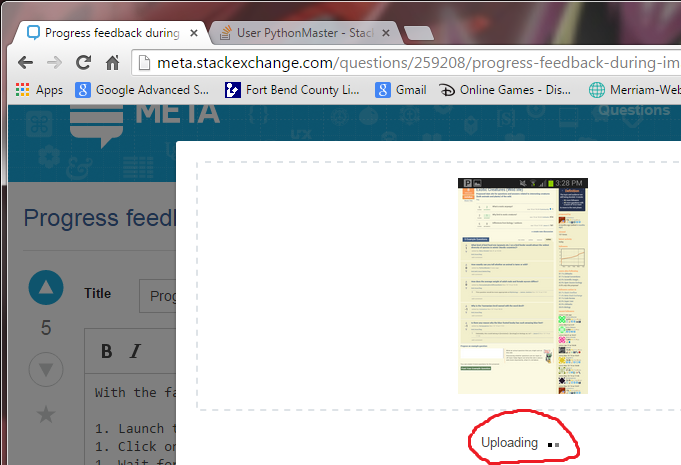 This should be used in the apps (Android and Apple) to help as visual feedback that the image is being uploaded. Also, the user can infer correctly that the app has not crashed or is buggy. If this image uploader gets applied to the apps, it will tremendously help us! I hope this gets implemented to the apps!

Not the answer you're looking for? Browse other questions tagged feature-request status-completed android-app .