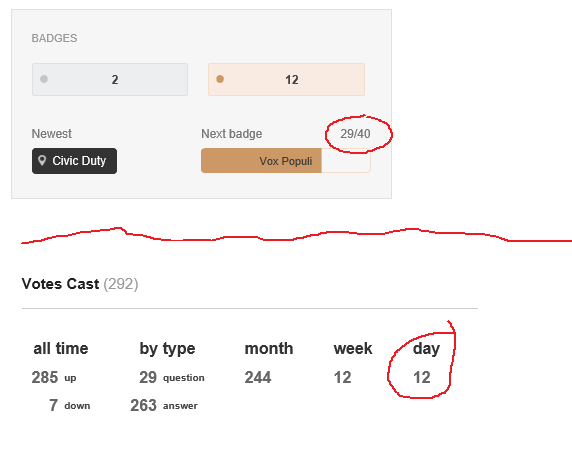 Please note, we gave the vote cast enough time to update but still it does not match the counter shown in the badge tracker. The thing is, the lady is new to SE and made serial votes, these votes most likely got rolled back, yet they still shown in the tracker but not in the vote cast. I might be wrong but we had a long chat regarding this and this is what we came up with, I could be wrong, but one thing for sure, the two counters do not match.

The vote cast tracker did catch up with the badge tracker eventually, but very slowly. It took three or even four days of voting till out of votes for the Vox Populi badge to be awarded. There might have been a few votes to the same user, but I got the impression that when there are votes in a short time, the vote counters do not catch up with them.

Might be worth checking out by people who know what they are talking about.

(I am the lady mentioned by OP.)

Added after a more than a year:
I still see the same problems, even though I am a well established user now.

Not the answer you're looking for? Browse other questions tagged support badges voting .

133
The Electorate badge discourages voting on answers
826
What are the badges I can earn on each site, and what are the exact criteria for earning each badge?
258
Reset votes on migrated questions
101
Cannot vote on question although 40 votes limit not reached
188
Gold Sportsmanship badge
186
"Autobiographer" Badge now only requires sharing what YOU want with the community
36
"Next tag badge" panel score and answers counter discrepancy