Has anyone tried to estimate Stack Overflow users skill by analyzing the data dumps?

Has there been any attempt to objectively estimate Stack Overflow users skill? If so, was any correlation between skill and reputation found?

To make the question more precise, let's assume skill to be defined as "ability to provide answers that end up on top".

Disclaimer: Self answered question. Just wanted to share my findings since I think it could be of interest to the community. I've tried hard not to formulate this Q/A as a plug for the stackapp. Let me know if I failed, and how to improve it. (I'm also genuinely interested in more answers than my own.)

Has there been any attempt to objectively estimate Stack Overflow users skill?

Yes, this has been done in a recently released StackApp called StackRating. Each question was seen as a "game", the responders were seen as "players" and the outcome of each game was determined by the votes. The players skill was then estimated using the Elo rating system.

In a nutshell it worked as follows: If you answer a question and get 20 upvotes, and I answer the same question and get 2 upvotes, then you have "won" and I have "lost". This will result in a positive rating update for you, and a negative rating update for me. The magnitude of the updates will depend on our current ratings; If you were higher rated than me, the result was expected, and our updates would be small. If on the other hand I had a higher rating than you, the result was unexpected and our updates would be large.

The key property of this approach to rating is that the ratings converge (as opposed to reputation which just grows and grows).

cnicutar's rating has a very characteristic graph which illustrates this:

For the details of how the scoring was implemented and what K value was used, see the about page.

If so, was any correlation between skill and reputation found?

Well, high rep users tend to be skilled in the sense that they are good at writing answers that end up on top (big surprise). Whether this corresponds to being a good programmer is up for debate, but arguments can be made that this is indeed the case.

The opposite is not true though. A low rep user can be an unskilled user or a skilled user (shouldn't come as a surprise either).

Perhaps someone who is more experienced with statistics can come to a more interesting conclusion. Here's the reputation vs rating plot: 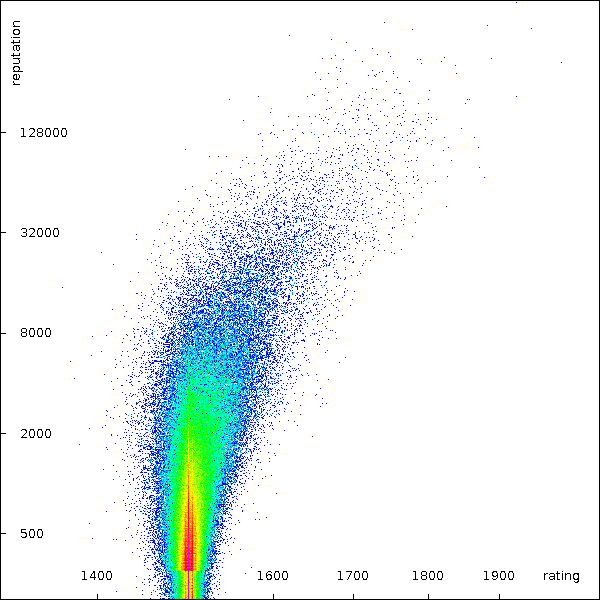 Jon Skeet is the blue dot at the top, and Eric Lippert is the dot furthest to the right.

The full list of users can be found at http://stackrating.com.

Not the answer you're looking for? Browse other questions tagged discussion users statistics .

74
What interesting stats can I obtain from the Stack Overflow data-dump?

73
Where in the world do Stack Overflow users say they are from?
176
The problem with extrinsic motivation
79
Has anyone ever hacked Stack Overflow?
297
We're working on a new stat to help convey the reach of your posts here
528
The MIT License – Clarity on Using Code on Stack Overflow and Stack Exchange
138
What data about meta has eluded Stack Exchange until recently?