Why would my People Reached (Impact) drop by ~13k? [duplicate]

Ask Question
Asked 6 years, 5 months ago
Active 6 years, 4 months ago
Viewed 228 times
8
This question already has an answer here:
What happened to the other people? My Impact (people reached) just dropped (1 answer)
Closed 6 years ago.

So, between yesterday and today, my "People Reached" metric on SO dropped by ~13k. I believe I was somewhere in the range of ~906k and now I'm down to ~893k. 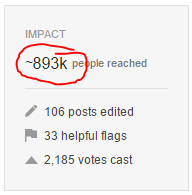 Sure, it's a (wildly) fuzzy metric... but barring some change to the algorithm, I wouldn't expect that the number of people I've "reached" could decrease. Certainly, I haven't noticed this behavior (until now) since the release of this feature.

For reference, Jaydles explains the feature in this post. Scroll down to the How it currently works (and why) section.

I had the same problem as seen here. Seemingly, one of your answers on a question with 13k views did not match the criteria in the accepted answer. But the 13k has come back as the People Reached is now back to 902k.

Not the answer you're looking for? Browse other questions tagged feature-request bug profile-page people-reached .

24
What happened to the other people? My Impact (people reached) just dropped
305
We're working on a new stat to help convey the reach of your posts here
19
Do you lose the reputation (points) you acquired from a question if/when it is deleted?

1203
Encouraging people to explain downvotes
302
Build and strengthen the Stack Exchange community with "crossover questions" between sites
24
What happened to the other people? My Impact (people reached) just dropped
18
Impact stat says I have reached a thousand thousand people
6
My Impact Rose... But My Answer Never Made the Requirements
18
Total people reached in all SE sites combined ("global impact"), under network profile?
5
Showing wrong impact count (people reached) 204k in my profile?