On SO somebody decided to upvote multiple of my answers in a row (or so it seems). Consequently, the nightly script removed the serial upvotes.
According to the FAQ, that should bring back the status quo ante. Quoting

Bold emphasis mine.
Related answers would also indicate as much:

But all of that contrasts with what I see. Voting reversal does not seem to work like that. In the case at hand, I never got any reputation from the serial upvotes to begin with, since I was past rep cap for the day. (There's more weird stuff going on, I never got past 195). The algorithm still deducted reputation the next day to give me a negative score for ... what exactly? 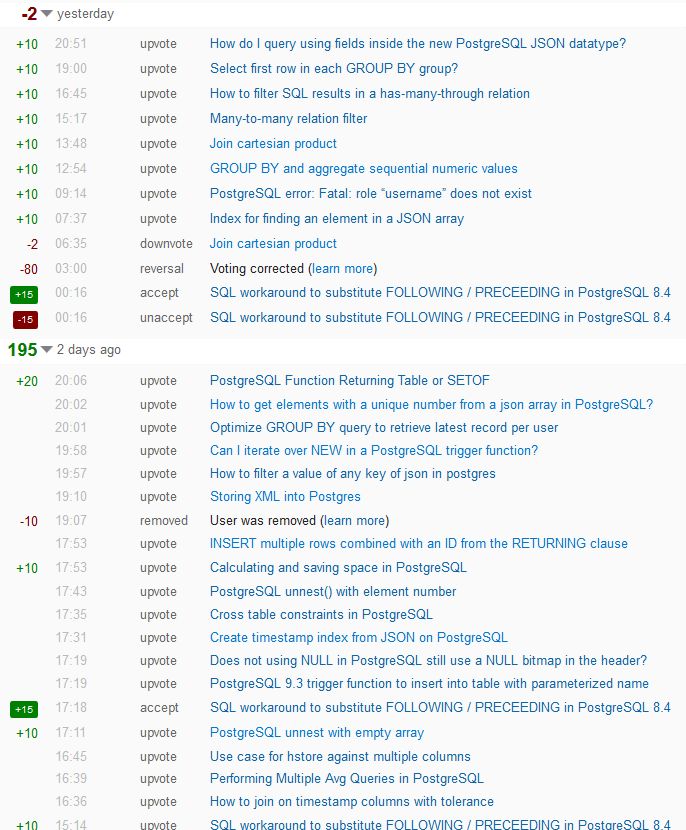 FAQ, previous answers and the voting correction algorithm, it doesn't add up. Or I am missing something?

The relevant part from https://stackoverflow.com/reputation (as per comments):

bug voting serial-voting
Share
Improve this question
edited May 23 '17 at 12:36

So, there are a couple of things that are really going on here, but first an foremost, the reputation tab in your profile is not designed or intended to be an accurate representation of your reputation as it exists in the database. It was designed to show you when and why your reputation changed on specific days.

What you are seeing in your reputation tab is that your rep changed by +195 2 days ago (20 upvotes, 1 unupvote, 1 accept, and -10 for a removed user). And then yesterday, your rep changed by -2. You had lost 80 rep due to serial voting reversal, got 8 upvotes and 1 downvote, and 1 unaccept and 1 (re)accept.

But what actually happened to your reputation is a lot different

Ultimately this messy situation is status-bydesign and not a bug. The profile reputation, as mentioned previously, is supposed to show you why your rep changed on specific days and not when it actually counted. This is how it works for any kind of reversal of the score

Could you imagine the confusion if the votes simply disappear or the voting reversals show up on the day they actually counted. You could sign in, see your rep drop by 200 and not know why. You would actually have to comb through your entire profile to figure out why you lost those points. So to deal with this issue, you are shown the reversal in your profile on the day the reversal occurred, but the rep is still actually lost on the day the vote/accept originally occurred.

Not the answer you're looking for? Browse other questions tagged bug voting serial-voting .

58
Separate and visually indicate reversed events from the day's reputation changes
573
What is serial voting and how does it affect me?
16
Serial Up-voting and Reputation Cap
5
Why do I get punished because one person decided to serial upvote me?
1
Days missing on Epic/Legendy badge progress

913
Why aren't people voting for questions?
14
sockpuppet jiu-jitsu: a possible technique for denying a user reputation for upvotes
53
Nicely discouraging serial upvoting
1240
Don't throw away all votes when a user is deleted
573
What is serial voting and how does it affect me?
16
Serial Up-voting and Reputation Cap
17
Can serial voting reversal please deduct the rep on the same day that the voting happened?
133
The vote fraud script breaks legitimate polling questions - A serial downvoter's lament