Why does downvoting a feature request penalize the asker?

However, a down-vote also has a sort of peer pressure to it. Which would mean that an unpopular feature request will be deleted. Which to me seems kind of odd. Also because this might cause other people to do the same feature request.

When a request is proposed properly, the discussion and answers might still be useful. Of course the user is free to leave the question open. But it's nobody likes having a question with a lot of down-votes on their record.

So how should I approach this when doing a feature request? Should I leave it up in spite of a mass of down-votes?

First, understand that this happens only on this meta, on Meta if you will. On per-site metas there is no independent rep and therefore votes have no effect on you other than emotional responses you may have.

Second, a feature request on Meta is a bigger deal. If you are the 4000th person to suggest that comments should be mandatory when downvoting, or that downvotes without comments should cost more, or any of other dozens of feature requests to solve the problem of commentless downvotes, then you are demonstrating that you don't really understand the history, culture, and mechanisms of the SE family of sites, and reducing your reputation seems like a fine response to that. If you are the first person to suggest that when two users post similar (almost identical) fact based answers to a question like "how long does it take to get from Paris to London by train?" or "which of these three sort methods is fastest?" or "what is this low plant with white flowers" that one of them should be forced to delete their answer, because they were obviously copying, then you are again demonstrating that you don't understand how these sites work or what they are for, and you're going to get downvotes and lose reputation.

I downvote FRs when I don't just dislike the suggested feature, but the question shows that the person cannot possibly have given the request the thought it deserves. If I disagree with a FR but think it shows thought and is generally aligned with the site, I will just upvote an answer that says "I don't support this idea and here's why." If such an answer doesn't exist I'll write one. I understand some people just see all FRs as polls and up/down vote to indicate what they think, but I don't believe those people are the majority.

When FRs get downvotes we often soothe the asker by saying "downvotes on Meta indicate disagreement, not quality" and that's sort of right. But you get more downvotes if your idea is actively wrongheaded or has been suggested many times in the past.

Finally, there are a number of logic holes in your post. You assume for example that Meta voters will downvote a feature request just because other people are doing so, and apparently believe that happens more on Meta, and therefore we should change the mechanisms to guard against that. You also seem to think that whether or not you gain or lose Meta rep is more important than whether or not your feature request is accepted. I've suggested a lot of things, and got a lot of rep for my suggestions, but they haven't been implemented, which makes me sad. The rep is no consolation, believe me.

As for what you should do if you get a lot of downvotes for a bad suggestion, I would try in this order:

The smarter move is what you've done here, which is to ask about a feature before suggesting it be removed or changed. Your underlying logic is right, and you can see that in the lack of independent rep on the per site meta sites. But Meta is special and this is one of the ways that it is special. Rep here is real. And the rules here are not like other places, and not all written down. And not everyone behaves the same or follows simple and logical published rules. That's just how Meta is.

Reputation on feature requests (and questions in general) rewards the asker for his/her contribution to the site.

If the question is received well, it will benefit the asker. If it isn't well received, it will help the asker to rethink if his/her ideas fit in the SE model and the opinion of the community.

Eventually it may even gather up-votes of same-minded users, so the usefulness can change over time. And indeed, the discussion might still be useful, so more reasons to keep the post.

Question bans on meta are given less already than on other sites for the possible number of down-votes on feature requests, so a single 'bad' post will not trigger instant question ban.

The loss of reputation doesn't hurt, so don't feel bad if you have a single down-voted post on your account. We all have and we are still okay.

Down voted feature requests are important. They show that the community did not like the idea as it was proposed. As the asker, this provides you with some feed back:

If you received answers to the request, it's likely that they contained information on why the request isn't a good idea. Utilize that information when you reconsider your request. It's possible that you didn't think of something more experienced users did.

Down votes aren't a bad thing and I wouldn't be concerned with them. A feature request, whether rejected or not, is your attempt at improving the platform. Sometimes your ideas for improving aren't the same as others.

If you received answers on your post and they received up votes, you won't be able to delete your question. You can, however, request that your name be removed via disassociation

To request disassociation, use the "contact us" link at the bottom of the page. In the form, say you want to disassociate a post and include the URL.

In that case, the down voted request will still remain on the site for future visitors, but your name won't be attached to it any longer.

Why does downvoting a feature request penalize the asker? Quite simply because (purely as a technical convenience?) we reuse what is normally a "question quality" voting mechanism to vote for or against the proposed feature.

We do this because it kind of makes sense up to a point, and because it would presumably be a big deal technically to have separate voting buttons for feature requests. Discussion when it does arise tends to gravitate towards "we should expect things to be different on meta", without really acknowledging that our process may be somewhat compromised by using one mechanism for two very different things.

Is this in fact the best solution? Is it actually an unthinkably big deal technically to add feature-voting buttons?

I would like to see both voting mechanisms freed from their "shared-use" compromise by the introduction (if possible) of separate feature-voting buttons in feature requests.

EDIT: below is a proposed implementation, which requires only two changes: 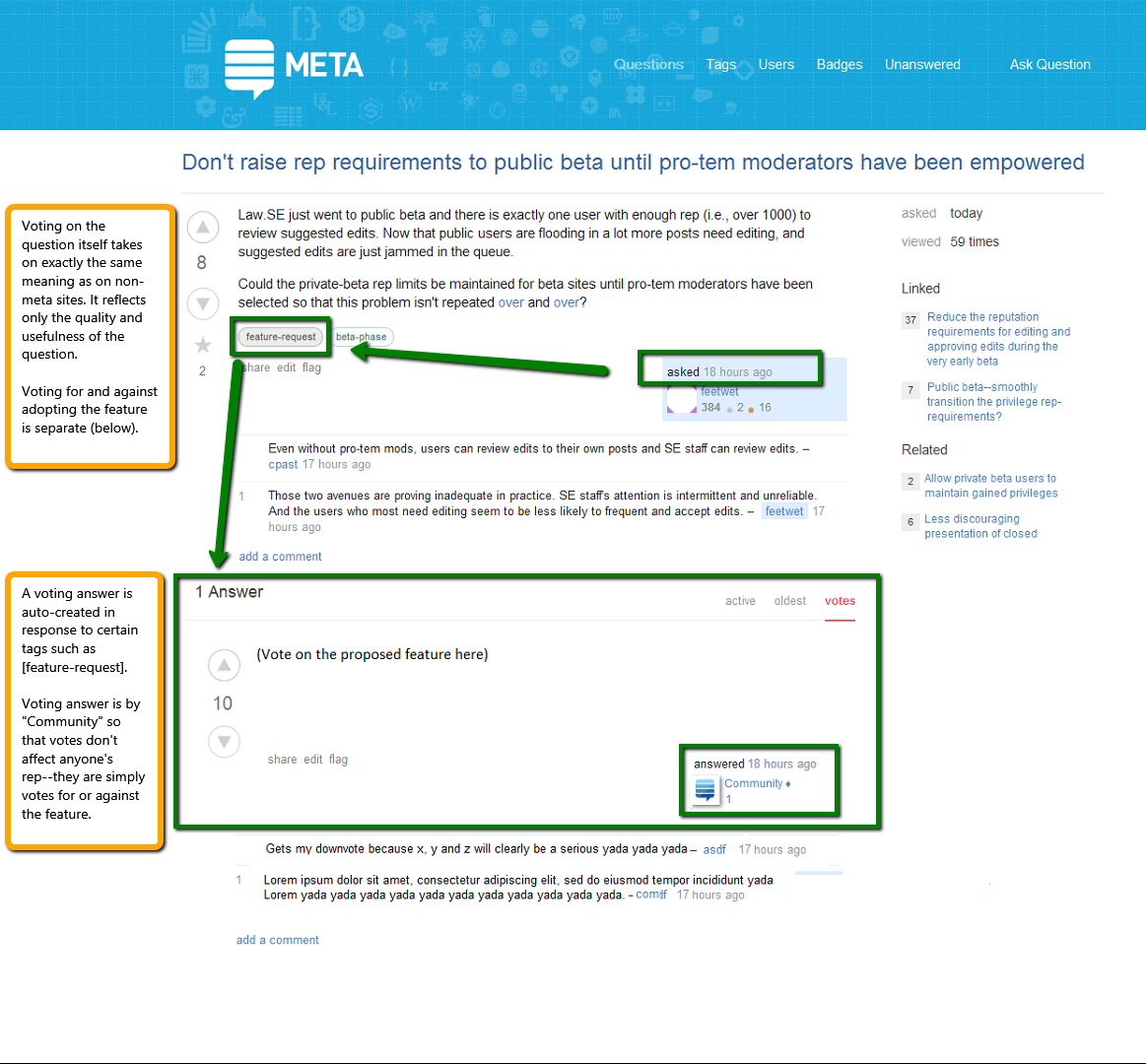 Not the answer you're looking for? Browse other questions tagged discussion reputation down-votes meta feature-request-process .

125
A Proposal for More Constructive Downvoting on Meta: Express Disagreement by Answering the Question
44
Could we have a Help Center page on disassociating posts?
31
Why are people downvoting my question on Meta?
8
Should I downvote feature-requests I don't like?

271
Why do you lose reputation for downvoting?
819
What does “user was removed” mean and why did my reputation change because of it?
319
Stack Overflow is getting a Meta of its own
22
Where a site change is within the 'community’s domain' propose a feature request even if it originates from within Stack Exchange staff
11
What is the purpose of an answer to a feature request question, and how does that differ from the purpose of a comment on a feature request?
2199
Firing mods and forced relicensing: is Stack Exchange still interested in cooperating with the community?
95
Meta: Can we influence and change policy or is our role reduced to exegesis of company commandments and acclamation?