Are rooms associated with per-site-metas shown when viewing a question?

I will include a rather lengthy explanation, which might be unnecessary for users familiar with the stuff I describe. Therefore:

TL;DR: Per-site-metas can have chat rooms associated with them, too. Are they shown in the side-bar when viewing the questions?

When viewing a questions, sometimes chat rooms are shown on the right in the side-bar. It might look something like this: 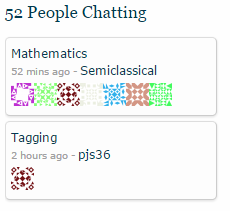 (Maybe you can see something similar while you are viewing this question.)

They do now always appear there. They are shown when viewing both questions on main and questions on meta. I do not know how the rooms are selected, but it seems that usually they are rooms which were active not too long ago. When I tried it now, on both main and meta I saw rooms associated with the main site.

Are the rooms associated with per-site-meta shown too when viewing questions on main or meta? Are they perhaps shown in some other places I did not notice?

I have just seen this on MathOverflow: 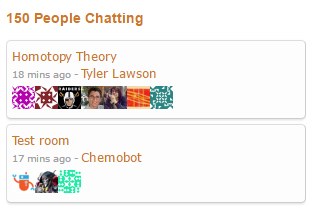 Link to this room associated with meta.MO was shown in sidebar.

I guess that the behavior changed recently as a result of this: Why can meta sites be parents of chatrooms?

Not the answer you're looking for? Browse other questions tagged support chat per-site-meta sidebar .

10
Why can meta sites be parents of chatrooms?
15
How are the chatrooms shown in the sidebar selected?
11
Which per-site-metas are offered in the chat-room creation dialogue?

615
Formatting Sandbox
856
The Many Memes of Meta
147
Make voting activity on your posts available on site metas (what you would get from rep if metas had rep)
161
Flags in chat are defective by design
323
Toward a philosophy of Chat
147
A guide to moderating chat
383
If you're gonna talk Politics, you must respect those who disagree
93
Please don't bring The Loop to per-site metas