When moderating I often want to come back to check the status of some post -- and while I often remember, I also often forget to check later.

I'm already often leaving notes reminding myself about things, but it's not integrated, and I'm unreliable so I'm wasting time and missing stuff I could catch.

For example, sometimes I see a potential problem and want to be able to check later that things are okay, rather than wait for someone to notice something actually went wrong in the end and point it out -- perhaps months later. Or I want to check that the poster actually made all of a set of suggested changes (by me or by some other user) that would avoid the necessity of other actions.

There are times when it would would either be quite wrong to take a specific action right away, or when you simply can't even tell for sure whether a certain action will be necessary (but you really want to make sure it happens when it should). Sometimes, the exception that needs to be handled isn't even an exception yet, and but later when it is, it's likely to be missed...

It would be nice if I could set a reminder relating to a post* to notify me after set amounts of time (usually 24 hours but it would be nice to be able to specify other values), and I could leave a brief note reminding me what I'm looking there for. [Note that this is not about delaying flags, but about any reason you need to check something about a post after allowing a specific amount of time - at which point there may be something to deal with.]

* linking them to posts would cover most use cases, but there might be situations where other reminders could be set, such as to check a user page or a chat room for example. [Even just the reminder-notes-about-posts would be hugely beneficial.]

As an example of a case where I'd want to leave a very short-time reminder, occasionally I see a weird answer that might be nothing more than a somewhat weak answer from a new user, or it might be a spam seed from a network spammer; I don't want to burn an innocent new user by acting as if it were spam too soon (when all they might need is a gentle push in the right direction). So I might initially treat it as a new user who needs guidance but I'd like to remind myself to look again in say half an hour and check if they're posting a bunch more poor answers, or subscribing to a large number of of other SE sites (both would definitely be cause for increased concern).

As network spammers become more sophisticated, it gets harder and harder to quickly tell them from ordinary new users.

I think the reminders should appear with other moderator notifications (in the diamond in the top bar along with announcenments, meta post notifications and so on), and would be dismissed when looked at (you can always set another on the rare occasions it would be needed again).

I think this would:

(a) allow moderators to be more nuanced in their actions (e.g. avoiding more drastic actions if gentler ones prove sufficient), making for a much friendlier face to new users

(b) speed up a number of moderation tasks, since I can be comfortable that I won't forget to do something when I check back later

(c) allow for more consistency and thoroughness in moderation

If these were linked to posts, the obvious place to put the option to set one would be in the "mod" menu items under the post (which has about 8 or 9 items in it - questions have more than answers). I suggest just adding one to the bottom, "() remind me" 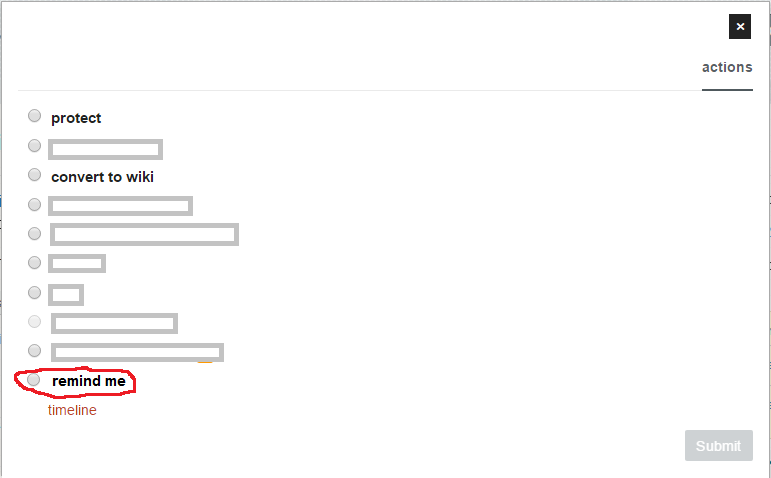 which when clicked could bring up a dialog something vaguely like:

where the number of hours can be noninteger (so I can ask for 0.5 hours, say), and the submit button is over on the right where it belongs.

I think that text box should be able to take about as much text as a post title, perhaps less (after all, I can abbreviate without worrying someone else won't understand).

Then after the allotted time, a new item shows up in the diamond menu, which behaves much like new meta posts or announcements do - except it says "reminder" instead of say "announcement" and the link goes to the relevant post. Once you get to the post (question or answer) you marked, your previous reminder-text pops up in a little window over the post, with some typical way of dismissing it, maybe something vaguely like:

You asked 6 hours ago to be reminded about:

45
Give mods a "flag for followup" flag ability
45
Can we have a feature to delay a flag for a short period of time?
15
Can we have a snooze alarm for flags?
-9
A note making feature in the personal page
-12
Notepad feature across StackExchange

849
Allow an edit to notify downvoters: "I think I've fixed the issue now - please check"
963
Show all of my question/answers to me even if they are deleted
264
"You have gained power. Here's how to use it." kind of message
386
Send authors an inbox message if their question is closed
417
Decision on rejected edits should be displayed as a notification to the editor
1236
Don't throw away all votes when a user is deleted
171
Make first draft of a new answer part of the permanent revision history
193
Allow moderators to reply to a flag
404
Add an "I don't understand" option for review audits