My flag history on Android Enthusiasts shows that I flagged (during review) this question: https://android.stackexchange.com/questions/109213/on-my-yureka-devive-on-kitkat-version-the-playstore-is-not-working (Now on hold but not when I posted this question) as Very Low Quality (VLQ).

However, visiting the question and checking the flag types available for the Question and the available Answers didn't reveal that I already flagged this Question, or the Answers there as VLQ.

What I mean is, irrespective of whether a VLQ flag is pending, or resolved as helpful or declined, I should be able to see a colored warning "you have already raised this type of flag" (below the flag type) after I click Flag option on the Question again. But VLQ is not visible, making the flag impossible to trace. (Note that the question wasn't ever upvoted.)

The VLQ option ideally should be visible but look like:

Screenshots (before on hold) for every item on this page:

What should be visible when the VLQ flag is pending?

In order to crosscheck this issue I randomly raised few VLQ flags on other SE sites to see what gets shown during the flag is pending, and when it receives the status as helpful, or declined.

Here is the deal:

When is the VLQ flag not visible?

I looked at some Meta.SE posts and came across this answer:

"Very Low Quality" is available on posts scoring 0 or less.

The intention with this flag is to communicate to the mods that a bit of content is so bad, it can not be salvaged by editing and needs to be removed. Clearly such questions should be closed and answers downvoted.

This answer and this one also share the same view.

On the other hand, this question(-1, at the time of writing; would be on-hold later for being off-topic) doesn't have a VLQ option available. 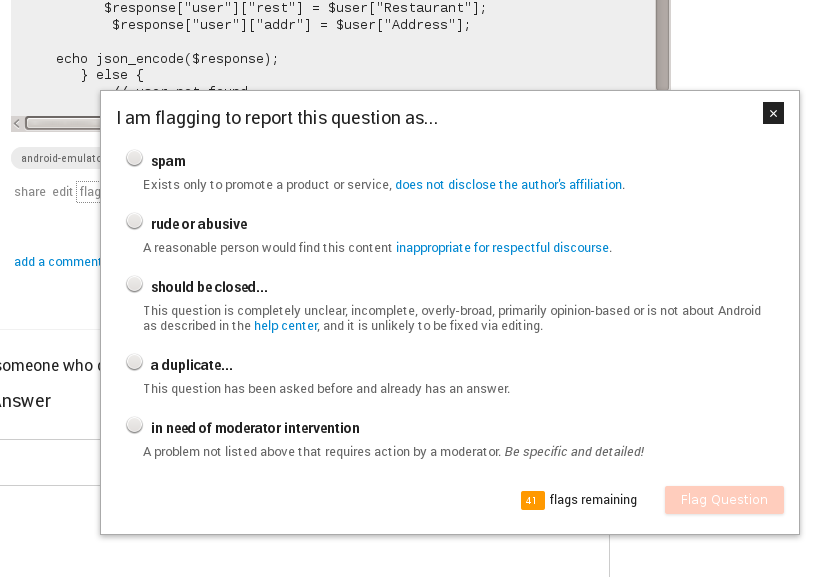 It is another matter that VLQ was unavailable for questions (on other SE sites) having -5/-6 or more downvotes. But I assume the reason is pretty obvious.

Back to the beginning

The VLQ flag was pending for this question, as visible in the screenshot, and the vote count was 0, so the VLQ flag type with that warning should have been visible to me! But it was not as if it was an upvoted question. Why so?

Moderator eldarerathis ♦ speculated that, because the ultimate goal is not to allow the user to use the same flag twice, it may very well be possible that the system hid that VLQ option to achieve the goal.

That may be true, but it then implies to me that there would be different settings applied for Android Enthusiasts while Super User, Web Apps and Software Recs (where I experimented) share common settings.

My goal was and still is, not to flag twice on same type but to trace the pending VLQ flag back to the original question. I'm unable to find any meta post regarding this different VLQ flag setting on Android Enthusiasts. Hence, I request the Community to let me know:

Note: I apologize to all those users who had to review those deliberate and random VLQ flags (9 in total) on Super User, Web Apps, and Software Recs. I understand it is a bad behavior on my part but I had no other choice to present a solid case at first. Please excuse my actions (it in turn affected my profile as well).

Why couldn't I see the VLQ option?

You quoted from this answer which mentions that the option is shown for 0 and negative score. What you missed is, there's another condition that this option will not be shown: when the question is undergoing close review.

Very Low Quality won't be available for questions that are currently undergoing Close review either.

Also, just to clarify, the flag is only applied to a particular post. When you flag a question, you only flag the question but not its answers. That explains why you don't see pending VLQ flag on the answers.

Not the answer you're looking for? Browse other questions tagged support flags low-quality-posts .

12
Disputed flags and triage
8
What happened to the "very low quality" flag reason?
8
It's (sometimes) possible to cast another flag on a question you have a pending VLQ flag on

617
Formatting Sandbox
713
How do I get attention for one of my own questions without a good answer?
820
What are the badges I can earn on each site, and what are the exact criteria for earning each badge?
572
What is serial voting and how does it affect me?
106
How do I properly use the "Not an Answer" flag?
435
Should Stack Exchange in general be awarding "A"s for Effort?
299
Add optional box for spam flags letting you say why you think it's spam
418
Can a machine be taught to flag spam automatically?