Tag filters have no tolerance for diacritics et al

If I create a tag filter that looks for the eleição tag on meta.pt.SO, it should return some questions, since they exist: 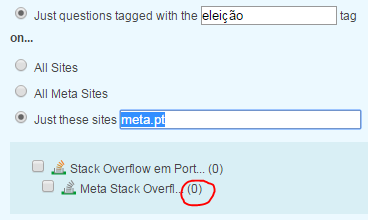 If the questions had been posted more recently we might have been able to blame caching, but the problem is actually that the tag filter functionality is unaware that Marc put in all that hard work supporting diacritics and non-Latin characters in tags, and just strips them all out:

For kicks I tried adding the грамматика tag from Russian Language—that fails entirely with an internal server error, presumably because it can't reduce the tag name to a non-zero amount of Latin characters, which in turn trips up the rest of the process.

"Tag filters aren't a highly used feature anyway" might be a reasonable response to this, but unfortunately I really kind of need the tag filter to work correctly to automatically pull election information for the Election Statistics site as there isn't another sane way to get notified of a new election*.

*In lieu of fixing this I will accept some other way of getting a list of active elections, since parsing the RSS feed is itself kind of obnoxious