Feature request: Make the default styling for SE (et al) such that you can see the right sidebar without scrolling at 900-ish pixels. (This may just be a rollback?)

It's a useful and reasonably frequent use case* to read SE sites in a browser window that takes up half of your screen and work in the other half, and right now that can be reasonably frustrating.

I'm on a Windows box with a "standard" 1920x1080 monitor, and use WinSplit Revolution to make two windows each take up half my screen.

The last week or two, I've noticed I'm unable to completely see what's on the sidebar next to the questions. I've been using SO for a while, and it seems like I would've noticed this earlier. So on that scant evidence, I wonder if it's a recent change. 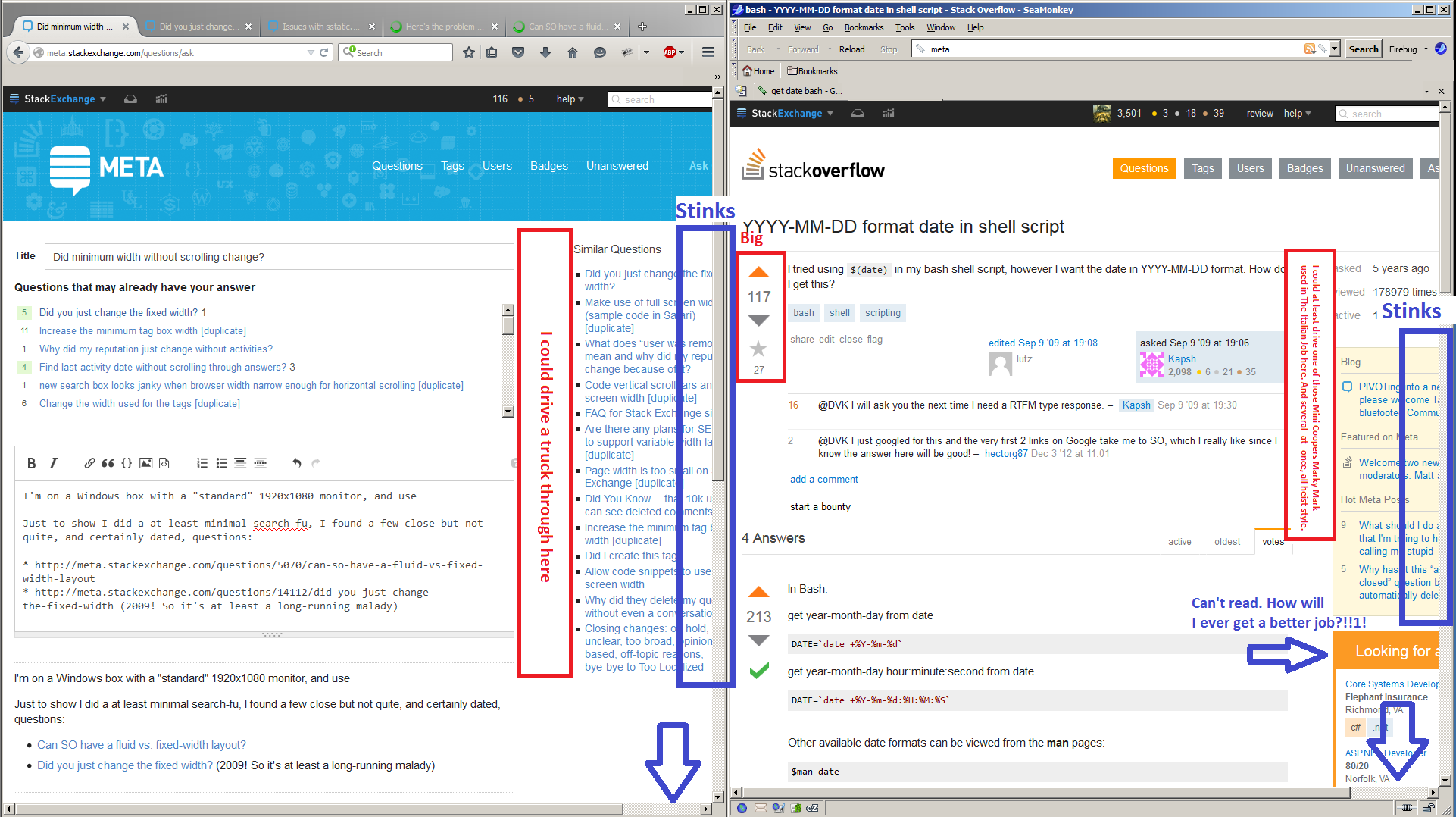 I can ctrl+[minus] my way out of this, so it's not a horrible dealbreaker, but did the minimum width for SO grow recently?

If this is common at 1920px wide, it's probably worth changing for those of us without an iMac or a 4K monitor or what-have-you.

I have ctrl-0'd in my browsers (yes, that's Seamonkey on the right. And there's no Seamonkey tag!) to make sure I'm not doing something completely idiotic. Well, other than using Seamonkey (which I enjoy).

Just to show I did at least minimal search-fu, I found a few close, but not quite, and certainly dated, questions:

Why isn't this the same as Can SO have a fluid vs. fixed-width layout?

I believe that's asking for a move from fixed to fluid. Here, I don't believe I have any problem with the width of the "answer column", or that it's a fixed size. But there's enough play with the margins, vote count sizes, and sidebars that I believe you could hit closer to 960.

Caveat: I've firebugged nothing in relation to this question.
EDIT: I've now firebugged just enough to know that...

75
Can SO have a fluid vs. fixed-width layout?
11
Are there any plans for SE sites to support variable width layout?
5
Did you just change the fixed width?

810
Allow an edit to notify downvoters: “I think I've fixed the issue now - please check”
914
Show all of my question/answers to me even if they are deleted
345
Reject an already-approved suggested edit when rolling it back
383
The robo-approvers are killing my will to review edits
6
How does the new sidebar navigation allow for screen space usage?