When trying to upload a picture from my phone, the Android app crashes a few different ways, depending on whether I select the Gallery or Photos image source. (Uploading by manually entering a URL works perfectly.) The problem occurred using beta versions 1.0.63, 1.0.71, 1.0.72, and now 1.0.73, on a Samsung Galaxy S4 running Android 4.1.2.

These are the steps which I've used:

If I select Gallery, when the pictures open, choosing one causes the app to immediately crash. The circle goes around for about 15 seconds (see picture on left below), then re-opens to the Ask a Question window, where the original text is still visible. The camera icon isn't live (it's grayed-out), so trying to post again in that window is not an option.

If I select Photos, when the pictures open, I can choose one. It pauses, which I interpret as an effort to post. After about 10 seconds, however, the app crashes to the feed screen, and an error message in a black box appears which says "Unfortunately, the process com.stackexchange.marvin has stopped." (See picture on right below.) There are Report and OK options under the error message. Initially I was able to get a screenshot, however the message disappeared before I could select Report, then the app crashed. However, on 8/11/15, and a few times since, I've been able to submit a report before the crash.

Update 9/2/15: With version 1.0.72, the error message varied, and many tries produced a picture a few times. There was no indication as to when or why it would happen, and each of those times, the picture posted sideways. With version 1.0.73, the error message has returned to the original, and fifty tries have not produced a posted picture from either Gallery or Photos. I'm updating this report in the hope that others are experiencing the same problem, or to be notified if the developers are aware of it. Thanks! 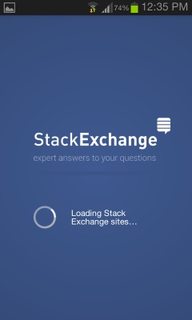 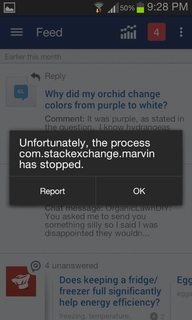 I just tried to reproduce and after about 10 seconds of waiting, error showed up about invalid or missing access token - it went away before I had the chance to take a screenshot. However, app didn't crash. Hope it would help the dev team debug and fix it.

Not the answer you're looking for? Browse other questions tagged bug android-app images .