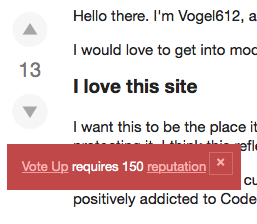 Which is actually wrong and the linked pages obviously tell that voting up / down requires 15 / 125 rep accordingly.

The sidebar tells however, that to vote for a candidate, you need 150 rep:

Any community member with 150 reputation may vote in the primary.

Though, as the wording of the error popup is still misleading, I'd propose to change it to something like:

Voting for / against the candidates requires 150 reputation

(probably it can be shortened a bit, as looks quite long)