Can we prevent duplicate spam questions?

Stack Exchange already checks new questions and rejects them if they're exact duplicates. When this happens the asker gets a message about this.

What it doesn't do is to check for deleted duplicate posts. So sometimes a spammer will ask the same seed question over and over and over again. Can the duplicate-checking engine help with this at all? We don't want to search against all deleted posts (unless the database is super-efficient) because that's a lot of stuff, but maybe we could check against posts deleted via flags, or perhaps posts deleted recently? (Flag-deletions would be better for fending off long-term spammers, which I've also seen.)

In this case the UI shouldn't tell the spammer that his question is rejected as a duplicate; that'll just teach 'em to modify the question each time, and that's no good either. Maybe it could "accept" it and then spam-delete it a minute or two later, after the OP has moved on to his next target. (On our site these seem to be human-powered spammers, not bots.) Or if that kind of quasi-hellban is a bad idea, maybe there's some better way to clean it up efficiently. On smaller communities it can take hours for the users to handle this, and once it gets to four spam flags probably only moderators are going to see it (because it drops off the front page at that point).

Naturally, this should also produce extra-strong signal to SpamRam: we deleted that as spam once already and the spammer came back and posted the exact same thing.

As requested, here's a screen shot of one of them. The pattern is that another user later "answers" with a spam link. 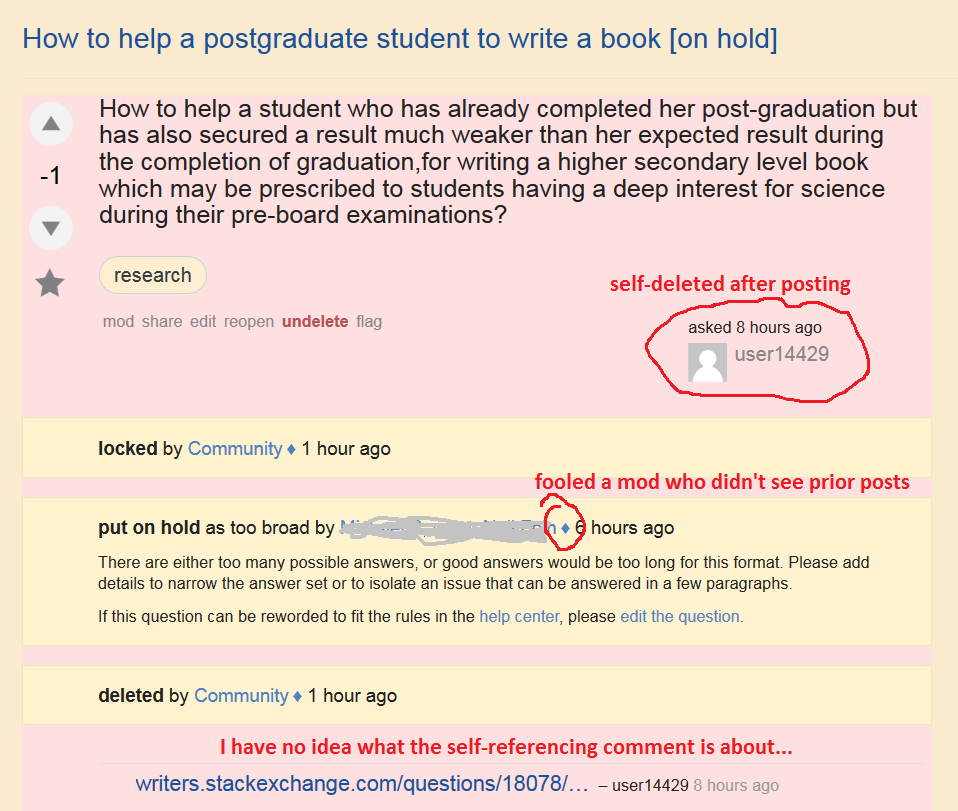 Although your screenshot says "fooled a mod", closing the question does solve the problem. There won't be a spam answer, and the question gets deleted in 9 days automatically. This is what happens quite often on Stack Overflow: many seeding questions appear (recently they tend to be about data scraping) and are processed normally: closed and then deleted by Roomba. In the absence of a spam answer they are just low-quality questions.

Should a spam answer appear, whoever flags it ought to take a second look at the question itself.

Which also solves the problem for the most part: the post that nobody sees can wait as long as it's needed for a moderator to check the flag queue.

My point is, the situation as you described it doesn't look that bad. Building extra procedures to guard against the (pretty special) case of duplicate seeding question posts doesn't seem worth the effort.

Can the duplicate-checking engine help with this at all?

Probably yes. Same concept/code, more posts to go through. The duplicate-checking engine should be upgraded so it can include posts with spam flags, low-quality flags, or those that have been recently deleted with a certain period of time. A spam detector could help since it could separate the non-spam from the spam. Then maybe we could include all deleted posts with spam flags, low-quality flags, from users with suspicious behavior, and other criteria only mods know.

Naturally, this should also produce extra-strong signal to SpamRam: we deleted that as spam once already and the spammer came back and posted the exact same thing.

If the user keeps on spamming, maybe there should be a automatic message sending system that tells the accused spammer to stop spamming or the mods will shower suspensions on you and a final creepy line at the end that says something like you have been warned.

Of course before the message sends, I suppose the spam detecting engines and mods should first put the accused users on notice. And after too much spam, send a warning. And if that does not work, just delete the user's account and permanently remove the user's post from existence.

Whatever SpamRam is, it better get a much more stronger signal so it can deal with these crazy spammers appropriately.

When the user clicks Post Your Question, there should be a warning box that says something like:

Are you sure that your post is not spam? If yes, click again to continue. But if it is spam, you will be dealt with appropriately... You have been warned.

Maybe the last line makes the warning a little too creepy but apply this to new users/users who seem to have problems with asking (previous question bans, does not have a good question rating/score, etc.). The warning should be able to make spammers rethink before posting.

Spam.SE!!!! Let's make a site where all people do is post spam so they don't have to bother with the other sites. After like 30 days, the questions are removed so the site is no completely cluttered with spam and the system doesn't go into overload... Probably, the least helpful solution here.

Spam mods? Just elect some people to help with spam. Instead of a blue diamond, they would have a orange diamond or whatever color you mods decide. When spam flags are raised, they rush to the scene and have the ability to delete questions with spam flags. These people should have a great flagging history, can be trusted, and have no suspicious activity in the past.

IP address banning! This is the definition of an IP address:

An IP address (short for Internet Protocol address) is used to identify computers on the Internet. It works like a return address would on a piece of mail.

Usually spammers will try to use multiple devices so they can spam with their one account. This is supposed to help them reach more users just in case they only use one different method of using SE. If the SE system can figure out what the IP address(es) are, SE could try preventing devices with those IP address(es) to be able to access SE (which means creating an account and posting spam, etc.).

But seriously, only use this (if can) if you are sure that the user is a spammer. I mean, we can't just block good guys like me and Jon Skeet and Shog9. That's just abusing the proilege.

Not the answer you're looking for? Browse other questions tagged feature-request duplicate-questions spam .

-24
How to find an appropriate Stack Exchange site for my question?

186
Do not delete good duplicates!
141
Limits for self-promotion in answers
436
Reward finding duplicate questions - +10, +2, -5
143
Should spam posts be edited?
106
Auto-delete/destroy 1 rep user when their post is deleted as spam
49
What can we do about all the reoccurring spam?
85
Raise an automatic flag for spammers
412
Can a machine be taught to flag spam automatically?
169
A machine can flag spam automatically. Can it do better?