Remove the pointless Area 51 roundabout to login to a private beta?

And now I can login: 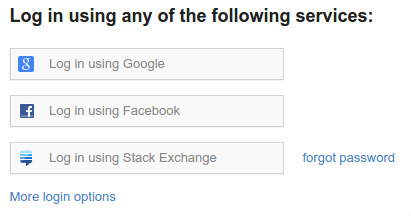 Is there any reason for this roundabout route to login? Surely knowing the URL of the site should be enough?

The main purpose: people often arrive late to things, and when it comes to proposals, we really need those people. Having it is mostly for usability, and it serves two important scenarios:

It lets folks in that want to get in and do stuff, while giving folks that have taken a keen interest in how new sites come together (or just want to watch prior to contributing) to join more or less as a spectator.

The answer by Energy Numbers is spot on, as is Jay's where he asserts that the effort and knowledge needed to use it is still a pretty effective gate into a private beta. If you didn't commit to it, we need to make sure you at least see the proposal before being allowed to join.

I'm declining this because the use cases are far too valuable to ditch it.

Surely there is a very useful benefit to this roundabout system, isn't there?

The private beta is a fragile but crucial time in a site's development, setting the culture, the mood, the level and the scope of the site.

This roundabout way ensures that not just anyone can walk in and start doing whatever they want. It allows people who know and understand how Stack Exchange works, to find their way in, if they really want to. And keeps anyone else out, unless they were part of the commitment phase.

So I'd argue against this feature request. As the VP of Community Growth Jaydles has explained, the current functionality has a purpose, and it works.

Not the answer you're looking for? Browse other questions tagged feature-request status-declined area51 login private-beta .

25
Why am I allowed to sign up on a private beta site I never commited to?

507
How about a “Vote not to close” option to counter the “Vote to close”?
1108
Encouraging people to explain downvotes
890
Show all of my question/answers to me even if they are deleted
307
Don't remove the @ part of my comment
1160
Don't throw away all votes when a user is deleted
519
Global auth is dead! Long live universal login
46
“How to Ask Questions in Private Beta” is listed in every site’s help centre