Below is the screenshot of my profile activity page that displays what the next-privilege milestone (expanded to show pop-up message box) I will be getting once I earn the 1000 reputation points. 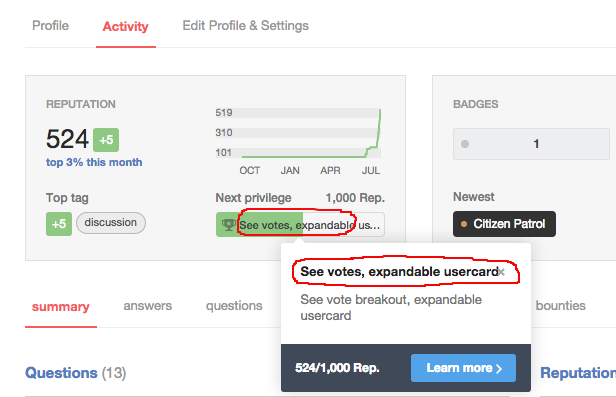 In the above screenshot, I have marked two places in the red. They are for displaying:

Whereas, in the pop-up message box (Bottom Red), you can see that both i.e. "title" and "short description" looks very similar. It's kinda redundant. We should change the title by giving the official name of the milestone privilege i.e. "Established user" and leave the short description below as it is to avoid redundancy. The shorter pop-up title will also help fix the "x" close-mark overlap bug (at least for this case).

Before this, I remember seeing "Create tags" and "Reduce ads" as the title for my next-privilege milestone. I can't reproduce it as the next-privilege does not allow you to choose the privilege (just like how Badges do - gear icon) to track. But, I did find another post where it shows a screenshot for the Access moderator tools next-privilege which does validates (and also PythonMaster answer below) my feature request. You can refer to the complete list of Privileges for more details.

So, if we follow the convention used for the all other next-privileges, then in that case, changing the next-privilege milestone name along with the pop-up title on message box to Established user surely makes sense.

Here is a mock-up that I have made: 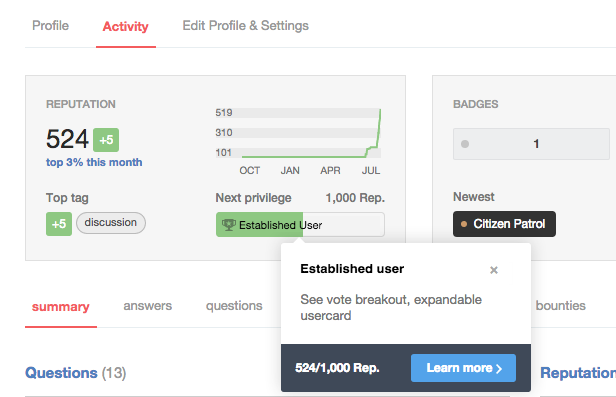 The above mock-up works very well as for the displaying name and title of the one privilege goes. But, there is one more twist here.

The displaying name and title of the next-privilege gets complicated even further when user's are awarded two privileges at the same reputation level. Let me explain this by sharing the following screenshot:

If you notice, now we have two privileges that are awarded at 1,000 reputation level i.e. "Established User" (milestone privilege) and the other "Create Gallery Chat Rooms" (communication privilege). The Privileges section of the Help Center also shows 2,000 rep-level where it awards the multiple privileges to users. And, this is where it really gets complicated as we have so little space to display.

So, how should we display/implement this now?

If this gets implemented correctly, then it will automatically solve the display issue with other multiple privileges given at certain rep-level e.g. 2,000 reps. (or even for the future ones, if created).

Please share your thoughts, ideas or any suggestions. Also, it would be great if someone from SE's UI/UX design team could post a reply along with a possible mock-up for this.

If this is implemented and it displays both privileges in the pop-up box, please pluralize the 'Next privilege' label above the progress bar.

Yes, yes they should.

It stays the same no matter where the next privilege is (if you even have another one to earn). The new privilege name is centralized in the box. Keep the consistancy and it looks better.

We usually call the vote breakout, vote counts. The extra info in the parentheses could help some users out about what vote counts are in the first place. But I suppose this could be optional, I mean it isn't that important...

Edit: With the complication from having two seperate privileges awarded at the same rep level, there could be a arrow button next to the text in the box that tells the user that there is another privilege. When hovered over, the tooltip should read:

Click to see the other privilege that can be earned at 1k rep.

It is a little long though... The same could be used when the box has been clicked. The privilege overview could have another arrow button that when clicked, shows the overview of the next privilege. The tooltip should be the same.

Not the answer you're looking for? Browse other questions tagged discussion feature-request design profile-page privileges .

113
Detect edits to add [SOLVED] or [RESOLVED] to the title and direct the user to add an answer
90
Propose a privilege to sit in the 500 reputation mark
127
Empowering tag-badge holders part II - let's look at silver?
8
Overlap bug in the next-privilege milestone pop-up message box
459
Employee profiles are now marked with a “Staff” indicator
554
The company’s commitment to rebuilding the relationship with you, our community