Unfortunately my account was blocked last week because a moderator mentioned that I was using sockpuppets. Please see this image: 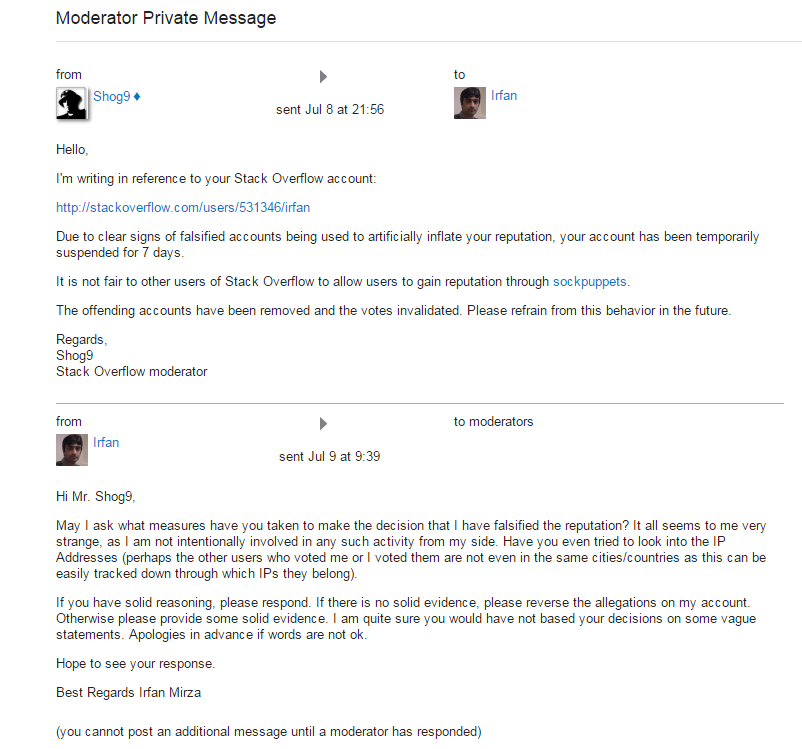 I believe that the user(s) linked with my account were not even in the same country (and I can prove it when required).

Have we voted for bogus moderators this time or is it moderation fault? The moderator is not even responding to my request. What should I do?

If you feel that a decision was made erroneously, the thing to do is contact us, send us a link to the message you received, and ask that someone review your case. If you have information that wasn't available to the person that took the action at the time that they did, be sure to include it.

When dealing with irregular or tactical voting anomalies, we're not always at liberty to divulge the means in which the pattern was discovered. Why not? Because that would make people bent on gaming the system even better at doing it next time, which would be unfortunate.

I reviewed every single vote you have ever received in the system, along with who cast them, when they were cast, and access logs of the site around that time. It doesn't matter where these users were coming from, what matters is that a fair number of your posts were hit directly by them, and up-voted in far less time than even gifted readers could finish reading them. Enough similarities exist to reasonably conclude that they were you, or were doing it at your request.

If you can explain this, then contact us and we'll talk about it. We will not discuss it further in public, this is a private matter because discussing it meaningfully means information we normally consider private being mentioned.

Shog9 is not a Stack Overflow moderator, the moderator message template is misleading in this case, he's a community manager working for Stack Exchange. He has plenty of experience in dealing with sock puppets, and I personally would trust his judgement.

If you want to challenge this decision, the proper way is to contact SE using the "contact us" link in the footer. Another SE employee will review the decision.

If you actually did create these socks and upvoted your own account, please don't do that and unnecessarily waste more time. If you can actually prove that these socks were in a different country, you know far too much about them, this is another piece of evidence that you control those accounts (or know the person controlling them). Just using a proxy or some other way to disguise your IP won't help you hide your socks.

Not the answer you're looking for? Browse other questions tagged support stack-overflow account-suspension .

704
How do I get attention for one of my own questions without a good answer?
198
Avoid the Streisand Effect - be clear about the reason when suspending an account
10
Moderator message asking about a blocked account
324
Stack Overflow is getting a Meta of its own
263
Let's disallow moderator nominations from people who've been suspended in the past year
288
Why we don't keep public records of suspensions
312
Was the retroactive change to CC BY-SA 4.0 approved by Stack Exchange's lawyers?
253
Stack Exchange staff speaking to the press instead of the community
949
Firing Community Managers: Stack Exchange is not interested in cooperating with the community, is it?