I spotted an inconsistency in the Epic badge tracker: 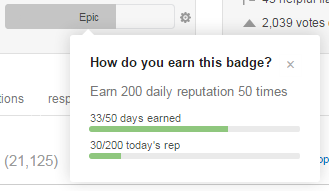 It says I earned 30 rep today, except my rep tab says:

So the today's rep bar should have been filled. Looks like it doesn't take bounties into account.

I can certainly blame caching for the missing accept, but the bounty was actually awarded before the upvotes.

For the record, I counted 33 qualifying days in my reputation graph, so today was correctly counted in the days earned bar, even though my /reputation page says:

(but I'm aware there are inconsistencies between the two already).

Originally only rep from upvotes, downvotes and suggested edits counted towards the Mortarboard, Epic and Legendary badges. So reaching 200 rep under this rule was really the maximum. However this was changed.

I guess that they forgot to change the working of the bar as well. This is happening to me too.

2
Daily reputation is not counted correctly on profile page
11
Mortarboard badges being awarded as a result of bounties after recalc
4
Is there a bug in Epic badge calculation?

8
Why did I get the Epic badge?
831
What are the badges I can earn on each site, and what are the exact criteria for earning each badge?
29
Epic badge received too early?