What exactly happens to a suggested edit if the post is removed by the author or for Moderation reasons?

This link will lead to an spam answer on Android Enthusiasts (affiliation wasn't disclosed; posted by user117708, now nuked!) which is deleted as of now, and only 10k and above reputation points holder would be able to see it.

Before I marked the answer as spam I rejected a Suggested Edit on it because I considered it to be polishing the spam. I also vaguely remember that, before checking my helpful flags to find that the flag was resolved as helpful I was the only one who reviewed that edit.

Now that I neither can find that deleted answer in my review history nor in the Suggestions history of the user who suggested that edit, I'm curious to know what exactly happened to that edit, or what usually happens to such an edit?

Edit: It is at least clear that not all the Suggested Edits disappear in thin air if the post is removed. Here is a reviewed Suggested Edit (found it here) for a question which was later voluntarily removed by its author.

support suggested-edits deleted-answers
share | improve this question | |
edited May 23 '17 at 12:37

I don't have 10k on Android.SE and can't comment on what happened on that edit, but generally speaking, those suggested edits stay in the queue. This SEDE query lists quite a few on Stack Overflow, e.g. this one where the timeline looks as follows: 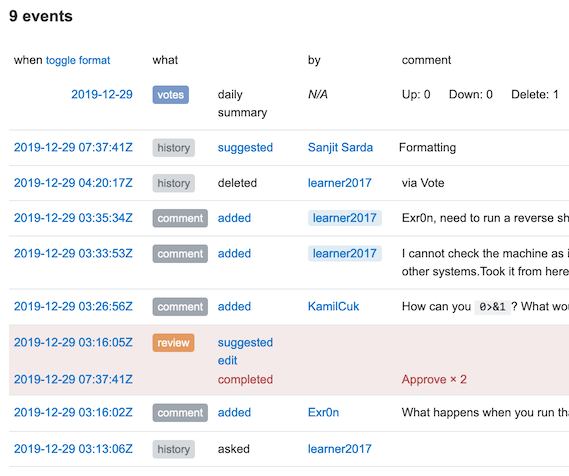 On the other hand, when a post is deleted as spam, the pending suggested edit is deleted (not just invalidated). I suggested a test edit on this post which was marked as spam, but the review link now 404s.

Not the answer you're looking for? Browse other questions tagged support suggested-edits deleted-answers .

287
How do suggested edits work?
412
Decision on rejected edits should be displayed as a notification to the editor
346
Reject an already-approved suggested edit when rolling it back
145
Improvements to a suggested edit cannot be submitted when the suggestion is approved during editing
116
A way to “downvote” a suggested edit and affect both the edit suggester and reviewers
303
Moderators should be able to manually ban users from suggesting edits
54
Spam-polishing audits
2410
Firing mods and forced relicensing: is Stack Exchange still interested in cooperating with the community?