Chat rooms bait for users and activity - that's a fact. Often when rooms grow to a point where discussions or meta-decisions needs to be conducted, a need to create more rooms around similar topics exists.

Use cases
Rooms that are used for collaboration on room features (namely room owner elections for the Javascript room, several chatbot testbeds, and temporary rooms to hash out issues). Linking these rooms will: 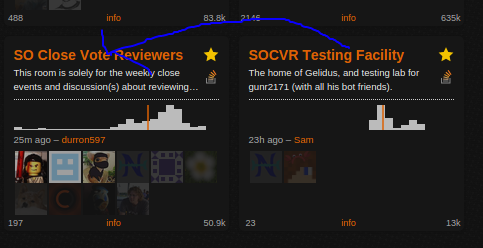 Rationale
Rooms that are created for being part of another room is confusing, and while occasionally on-topic, doesn't strictly behave well in the format of a separate room. However, that doesn't prevent it from happening many times. Very often, the demand is only temporary but arises on regular basis's. It is difficult for visitors to understand the source, as well as a synchronized management system. Additionally, the information held in them is as precious as in any other room! When they are frozen and deleted (because of low user participation), it is buried from the room and never seen by anyone again. By marking them as sub-rooms, they are hung on appropriately and can be organized in a better format. They would also enhance the organization of chat rooms and provide a medium for the communities of each chat room to organize better.

Also suggesting sub-rooms to be moderated by room owners of the main rooms only so as to be synchronized.

Seeing myself, and two of my favourite chatrooms, I feel I should speak up.

The two chatrooms that are listed above, namely The Bikeshed and Chatbot Dev both belong to Open Source SE. Since the site is creating relations with various organizations, such as the Open Source Initiative, we're using bots in an effort to ease those communications. As such, we created the Chatbot Dev room, so that The Bikeshed can keep to site discussions. Both sites are one of the most active chatrooms that I've seen in the entire SE network.

About the proposal, I don't know where I stand, because I don't understand it completely. As far as I have seen, we pin messages in our main chatroom for updates, and friendly reminders of other rooms. More importantly, but each site room has a button "Site Rooms" which lists all the chatrooms associated with the site. I can't speak for the perspective of Open Source, any rooms that I've seen are only for our bots and our Bikeshed: any other rooms are for one on one discussions between various members of the community.

I see the rationale here: Many times, discussions do get out of hand, and we might need someone to moderate. One of our rooms was created because our community was at the moment to speak with representatives of the Open Source Initiative.

This is what I see here:

Each site is assigned a main room, which has notices to its sub rooms, with a sort of request feature where users can request separate rooms with moderation for example. Each room created has a reference in the site's main room. It's sort of like a hierarchy structure:

If I understand this correctly, then I'm in support of this, as it would help sites maintain chatrooms effectively, moderate them as needed, and keep a reference to all appropriate rooms.

Not the answer you're looking for? Browse other questions tagged feature-request chat .

30
Will there be an "invitation per SO question" feature for the chat?
38
Definitive rules on chat rooms with non-technical discussion
161
Flags in chat are defective by design
27
Make it possible for normal users to unfreeze auto-frozen chat rooms
58
Prevent exposure of messages from private chat rooms
323
Toward a philosophy of Chat